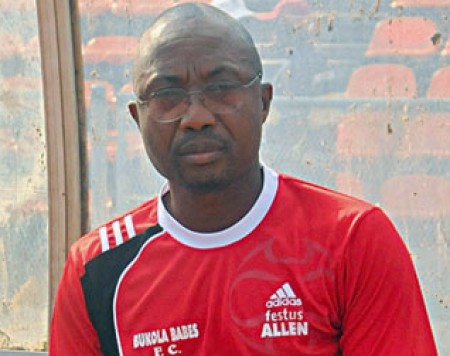 Coach Festus Allen of Nigeria’s premier league side, Shooting Stars of Ibadan, is under intense pressure from their vociferous Ibadan fans having failed to garner maximum points at home yet again.

The Oluyole Warriors laboured to a 1-1 draw against neighbours,  Sunshine Stars of Akure; a situation which has resulted in some fans calling for the head of the coach.

Kayode Badmus was part of the hundreds who witnessed Saturday’s 1-1 draw at the Obafemi Awolowo Stadium, Ibadan and for him, its high time the services of a ‘better’ coach is sought for to change the fortunes of 3SC.

“I don’t know what is actually wrong with Coach Allen, he is just not getting his rhythm here in Ibadan, I think we need another coach as soon as possible,” Mr. Badmus said.

Saturday’s draw is the third in five home games for the Oluyole Warriors and currently puts them in the bottom half of the League table.

While it is not sure how long the management of Shooting Stars will be able to bear with Coach Allen and his team, time is not on the side of the team who have barely survived to remain in the elite division of the League in the past two seasons.

Meanwhile in other fixtures, Enugu Rangers  proved that last weekend’s  0-0 away draw to Rising Stars was no fluke as they recorded same result in Ilorin against Kwara United.

Also in Minna, ABS FC got their first point on the road as they forced their host, Niger Tonardoes to a 1-1 draw