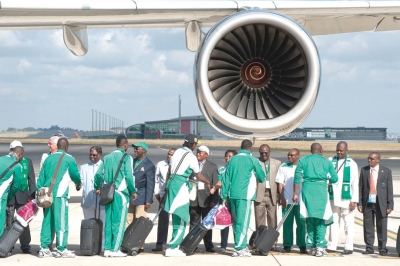 The Super Eagles camp at Bolton White Apartment in Zone 7, Abuja came alive Monday afternoon with at least 21 players in camp as at 5pm.

All other nine players are expected before the close of the day, team coordinator, Emmanuel Atta revealed.

Those already in camp as a press time include, Chigozie Agbim, who currently skippers the team and his other two colleagues between the post, Okemute Odah and Dan Akpeyi.

Head Coach, Stephen Okechukwu Keshi, who spoke through one of his assistants, Ike Shorunmu, revealed that training was not held on Monday evening because most of the players who came on the morning of the day were fagged out by jet-leg and transport hassles and needed to rest for proper training to commence on Tuesday morning at the National Stadium in Abuja.

Keshi is expected to lead the usually rigorous training, as the team steadies for the friendly against Liberia in eight days’ time and the all-important Nations Cup qualifier against Rwanda in Kigali on February 29.