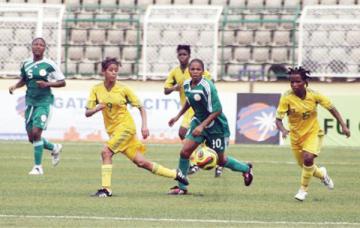 The flamingoes in one of their matches

According to the travel schedule, the U-17 Women’s National Team of Kenya will fly into Lagos on Thursday evening ahead of Saturday’s 2012 FIFA U-17 Women’s World Cup qualifier against the Flamingoes of Nigeria.

The letter from the KFF stated, inter alia: “We have decided to honour the match, and will therefore send to you our travel itinerary, which should be on Thursday, 2nd February, 2012 in a contingent of 27 people composed of 18 players and 7 officials”.

The Kenyan delegation will fly into the Murtala Muhammed International Airport aboard Kenyan Airways flight on Thursday evening. Already, the Nigeria Football Federation and the Ogun State Government have made arrangements to take the delegation members to Abeokuta on Thursday night.

Meanwhile, the Flamingoes have continued their preparation for Saturday’s match at the MKO Abiola Stadium.

Nigeria won the first leg 2-0 in Nairobi and will most certainly play Zambia in the final round of qualifiers in March.

Governor Ibikunle Amosun of Ogun State, who treated the Flamingoes and their officials to a dinner at the Government House, Abeokuta, on Monday, and presented them with a cash gift of N2.5 million, will be Special Guest of Honour at Saturday’s match.