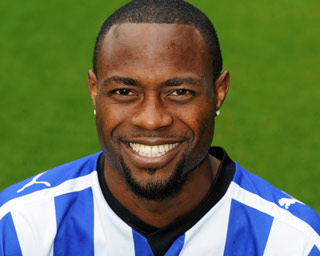 Scottish Premier League side, Hibernian FC, says it has reached an agreement to part company with Nigerian striker, Akpo Sodje.

Akpo, the youngest of the Sodje brothers, has not been opportuned to play for Nigeria’s national team, the Super Eagles, unlike his two brothers Sam and Efe who have both donned the country’s colours in the recent past.

Sodje scored seven goals in 30 appearances for the Edinburgh club and left by mutual agreement, according to a statement on the club’s website.

“Hibernian would like to thank Akpo for his contribution and we wish him every success as he embarks on the next chapter in his career,” said the club.

Sodje joined Hibs from Charlton and before that played for Sheffield Wednesday, Port Vale and Darlington.

Sodje signed for the Scottish Premier League (SPL) side Hibernian on a free transfer on 31 January 2011. He made his debut two days later, setting up the opening goal in a 2–0 win against St. Mirren. Sodje scored his first goal for Hibernianin at their next game, a 2–1 win over Kilmarnock. The player scored six goals for Hibs in the latter part of the 2010–11 season.

In January 2012, Hibs allowed Sodje to join Belgian club KVC Westerlo on trial before releasing him from his contract on Tuesday.

Companies that benefited from fuel subsidy trillions paid no tax