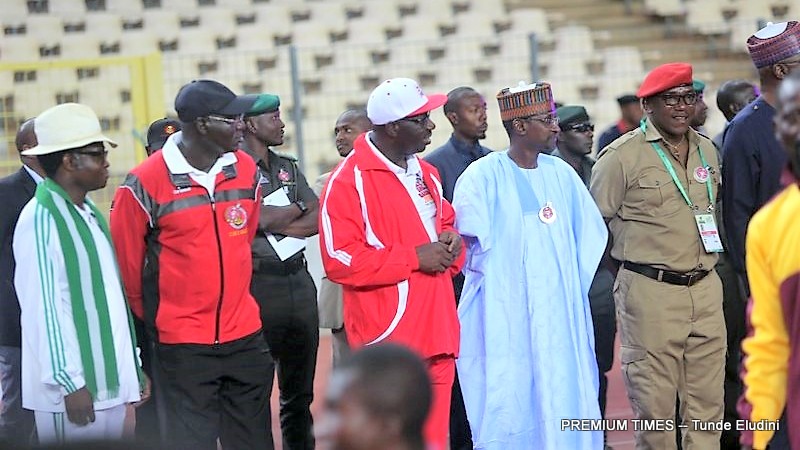 The Chief of Army Staff, Tukur Buratai, as well as the Edo State Governor, Godwin Obaseki, were among the dignitaries who graced the opening ceremony of the 19th National Sports Festival on Thursday at the National Stadium Abuja.

Though the opening ceremony was greeted mostly with empty seats as there appeared to be inadequate awareness about the multi-sports event among residents of the Federal Capital Territory and its environs, organisers did their bit to have a spectacle.

Activities of the night started with the traditional march past by the contingents of all the states in attendance.

The athletes marched around the stadium in their hundreds with the likes of Delta, Edo and Lagos states boasting of the largest set of contingents.

In his remark, the secretary of the Nigeria Olympic Committee, Tunde Popoola, who stood in for the NOC President, Habu Gumel, said the youth and sports minister, Solomon Dalung, deserves special commendation for finally making the 19th NSF a reality.

According to Mr Popoola, the NSF is a vital part of the Nigeria sports calendar and it should be given utmost priority going forward.

“This is our own local Olympic Games. We know the abundance of talents that the Sports Festival has produced, since the first edition in Lagos. I will like to enjoin everyone that we need to do all that is possible to ensure this is kept going.”

On his part, the FCT minister, Muhammed Bello, who is the host, assured the athletes of a good stay in Abuja even as he enjoined all participants to be true sportsmen and women.

“We are going to be very good hosts to all the athletes, as you know Abuja is home to every Nigerian, so the athletes should feel at home while they complete for laurels,” the FCT minister said.

For Mr Dalung, he admitted that making the 19th edition of the NSF a reality was a tortuous journey but he thanked the president, Muhammadu Buhari, for making funds available to host the games.

The sports minister charged the national assembly to increase its allocation to sports as he reckoned that sports is giving so much to Nigeria but getting very little in return.

Mr Dalung also noted that the importance of the NSF cannot be overemphasized as he posited that the sports festival, NYSC and the FCT are the major pillars of Nigeria’s unity.

With the opening ceremony now over, the official chase for medals will begin on Friday across the different centres chosen to host different sports.