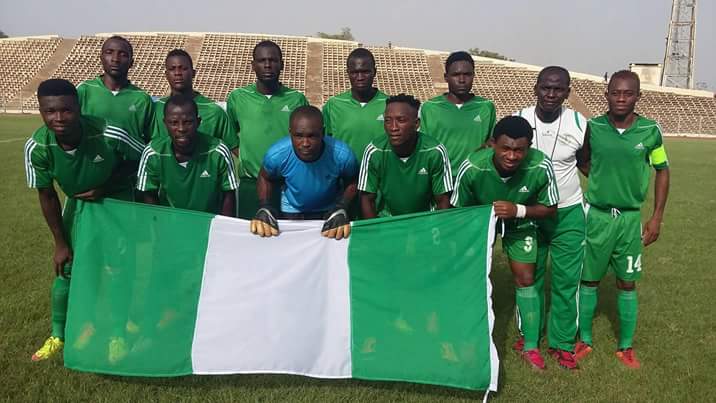 Deaf Eagles stood out in spite of loss to Mali – coach

The Head Coach of the Nigeria Deaf Football Association (NDFA), Banjo Kamiludeen, says the Deaf Eagles distinguished themselves at the finals of the just-concluded West African Deaf Football (WADFU) tournament in spite of their 0-1 loss to Mali.

The News Agency of Nigeria (NAN) reports that eight countries featured in the tournament which took place in Lome from August 5 to 12.

Nigeria lost to Mali three minutes to the end of the match as the Malian’s penetrated Nigeria’s defence and scored.

Mr Kamiludeen told NAN on Monday that the match was tough and was expected to end in a goalless draw, as footballers ”held strong on their wings and keepers took charge of the goalposts”.

“Both teams were good, but the Deaf Eagles stood out from the group matches till the finals, but in football, outside a draw, a winner and a loser or runner-up must emerge.

“I train the boys. I know their individual capabilities and team spirit; they took possession of the match and thrilled spectators with their skills but narrowly suffered a defeat.

“We had already conditioned our minds for penalty shootouts which would have favoured us because the boys are able and our keeper is good.

“In spite of our being the second best in the tournament, I commend the boys for their efforts because eight countries participated and we progressed to the final,” he said.

The coach, who commended the Federal Ministry of Youth and Sports Development for sponsorship, confirmed that the 25-man delegation returned to Nigeria on Monday.

NAN reports that Deaf Eagles, defending champions of the 2017 edition hosted by Mali, have made it five times to the finals and lifted the trophy three times, back to back in the 1st, 2nd and 3rd editions.

The Deaf Eagles were also runners-up in the 4th, 5th and the just-concluded 8th editions of the WADFU fiesta.