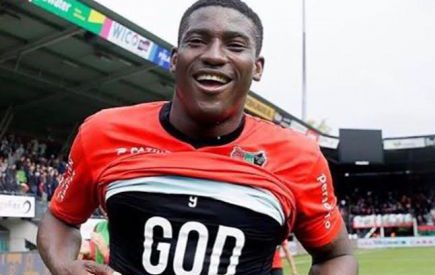 Taiwo Awoniyi is gradually making a name for himself among Nigerian footballers abroad.

The forward burst into the limelight with his exploits with the Golden Eaglets squad of 2013 that conquered the world in the United Arab Emirates.

His lethal displays in front of goal were quick to earn him the tag of the next Rashidi Yekini.

Though he is yet to fully metamorphose or step into Yekini’s shoes, Awoniyi has shown that he can even as he improves his game.

However, while he is hugging the big screens now playing in Belgium for Royal Excel Mouscron on-loan from Liverpool of England, it was never an easy ride to the top for Awoniyi. He tells PREMIUM TIMES in this exclusive interview how he combed refuse sites to get shoes to wear for training.

PT: You have finally found your groove in Belgium after playing in Germany and Netherlands. What has really changed and what can you attribute your new scoring form to.

Playing in Germany and Netherland were wonderful experiences and opportunity for me. I believe God used this to make me to see and learn a lot of things in football and life as a whole.

Both leagues are great, the type in which every player can use to develop. And though I need to be strong as a player, and on the scoring aspect, nothing really to say than to give all the glory to God, him alone make all things possible.

God be praised for it all, he made all things possible and him alone deserve all the glory.

PT: Belgium has a lot of history when it comes to Nigerian players, how much of that have you discovered and how would you like to be remembered playing in Belgium.

I am always proud of the talent we are blessed with in Nigeria and thank God for the privilege as well. As for Nigerian players, we will always make history as far as the game is concerned. Many have created it and lots of Nigerians in the first and second league are still creating it more each day in the league here and elsewhere.

I pray we all keep the flag flying till the end.

My goal is always to be the best I can be with the help of God as a player and do my very best each time I have the opportunity.

PT: You are originally signed to Liverpool, just like Victor Moses who was persistently sent out on loan by Chelsea and when he had the chance he seized the moment, do you think you can do the same with the Reds.

I come from a Christian family and one of the most important thing as a Christian is to keep on having faith and believe in God. Victor Moses is a great legend and ambassador for our country already and does great things as a player and still doing it. The same goes with every player out there, everyone has different talent and when given the chance, everything can change with just a game.

I had days when I walked for hours to get to training but I was persistent. That persistence and consistency with the faith and belief that one day it will change has brought me here and bless God it does change. I still have those qualities till now, so I still believe with God all things are possible till my last breath.

PT: Looking at your 2013 Golden Eaglets teammates, would you say that you guys are living up to the lofty expectations on your set

Looking back at the set, I remember how we all pray as a team for a better outing and better future, but football looks good on the outside when watching but a lot is involved which I believe every player working on the line will understand.

I think everyone should be appreciated in their own way and not only in football but in other job everyone is into. Also, because every job requires some sacrifice, and I hope we all get to the point where each and every person gets to live the dream they set out for their lives.

PT: You have started your progression with the national teams, from U-17 to U-20 to U-23, do you see yourself breaking into the Super Eagles team anytime soon.

Bless God for the privilege to be part of all the age group teams from the U17 till U23. I also thank all the coaches that gave me the privilege, mostly chief Manu, Nduka  Ugbade, Emmannuel Amunike, Emeka Amadi and all the staff of 2013 U17 sets.

There are lots of talents present in Nigeria and it is one of the dreams of most footballers to be part of the Super Eagles one day. Most players out there today, one time or the other, made their breakthrough through the age grade competitions they played for Nigeria. It is everyone’s dream, including mine, to be part of the Super Eagles but at the same time not all can be there at once.

You just have to keep on believing and working hard then maybe one day it will be your turn and is also my dream one day as a player.

PT: Recently, you renewed your contract with Nike, can you tell us a bit about that and how does it feel to be on the extensive list of stars with endorsements from the sports kits manufacturing company.

I will forever appreciate and give God the glory because if you know me personally then will know all is just by his Grace. I remember then in Kwara state, I have to go to where all this waste product are thrown in search of shoes I can join together to make football shoes. The first shoe I took to training was my Christmas shoe my dad struggled to buy for me to make me equal with mates.

I have to learn how to sew shoes at home just to play football and I remember my dad bought me a football shoe and when it tore, I was forced to look for an alternative myself by going in search of a waste shoe being thrown away. I found one with Nike logo, I removed the logo and join it with the shoe, all my friend at United Academy were amazed at how I was able to create it then. Even my grassroots coach Abdulrasaq Olojo, was surprised and when anyone’s boot tore, he will ask me to fix it for them.

I later moved to Imperial Soccer Academy owned by Mr. Seyi Olofinjana where you’re given boots and other stuff for free and then it became easier as a player.

The first time I signed with Nike was two years ago and when I was told they were renewing it this year, I was really happy and with something different from the former one.

It is just God and am forever grateful for the privilege and thank everyone that made it possible; Imperial soccer Academy management, my family and youth coach Abdulrasaq Olojo and friends for their prayer and also Crig Consult for the great job done.

PT: Taiwo Awoniyi off the pitch, what interests you outside football

The only thing that interests me more outside football is just to learn how to do away with things that can draw me away from God and learn to give praise to God because that is the only thing I can give to God. Also for me, my family, friends and if possible the whole world to know him more and seek his kingdom first, so that all of us can be a part of his eternity.

Anything that comes after this is just secondary.

PT: So far, what would you say is your best moment as a footballer? Also talk about your worst moment

I will say my best moments was towards the last six games in Holland last season because I know what I was into at the time. Also, when we won the U17 World cup, U20 Nations Cup and when I scored in the qualifier at the U23 in Zambia. These were my best moments

My worst moments were when we were beaten by Germany in the U20 World Cup in New Zealand, when I was put in the alternate list at the U23 squad and after the first 8 games in Holland last season.

PT: Nigeria is set to play at the Russia 2018 World Cup. Are you ready or will wait for 2022 edition

Every player dreams to be part of it whether in Russia or in 2022 but I believe the race is not to the swift nor the battle to the strongest, but time and chance happens to them all.

So I will keep on believing and doing my best and hopefully, God will make it count for me to be part of any. But it is everyone dreams

PT: How far do you see the Eagles going at next World Cup?

As for me, if you can believe, there’s no height you can’t attain. It might look difficult to some but I believe we can get as far as the final by God’s Grace.