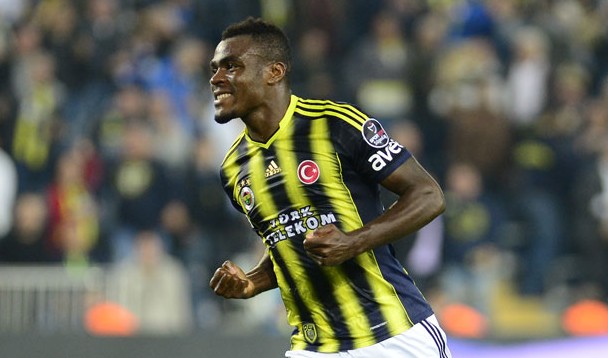 Former Super Eagles striker, Emmanuel Emenike, inspired his Turkish club, Fenerbahce, to their first win in the League this season with a master class performance on Monday night.

The Nigerian striker scored once, and provided two assists as the Yellow Canneries finally got in their element, thrashing Kasimpasa 1-5 away from home.

It was Brazilian midfielder, Josef de Souza, who opened scoring for Fenerbahce in the 11th minute off an assist from Emenike.

Ozan Tufan doubled Fenerbahce’s lead nine minutes after before Emenike joined the scoring spree and banged in the third goal by the stroke of half time.

Kasimpasa had a glimmer of hope when Tunay Torun from the penalty spot reduced the deficit to 3-1 early in the second half.

However, Fenerbahce, which lost one and drew two of their earlier league games, made sure they killed off the game with two more second half goals.

Emenike had a hand in one of those goals as Fenerbahce smiled away with a 1-5 victory at the end.

The win notwithstanding, the former champions are 10th on the log with four points from four games

ANALYSIS: How House of Reps may resolve budget scandal