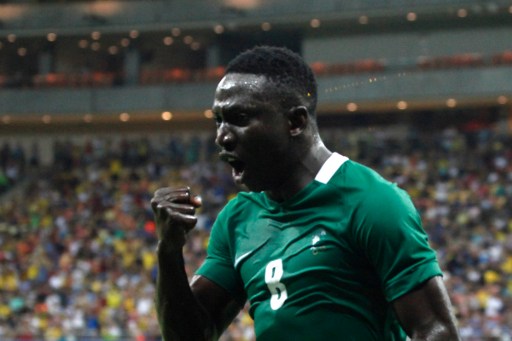 Oghenekaro Etebo scored four goals for the Nigeria U-23 team as the Dream Team VI got off to a winning start in the men’s football event of the Rio Olympics; beating Japan 5-4 early Friday morning at the Amazonia Arena in Manaus.

Many had feared for the worst for the Nigerian team who only arrived in Manus few hours to kickoff after a chaotic travel arrangement saw the Dream Team VI holed up in Atlanta, Georgia, for almost four days.

But all the crisis that plagued the team were momentarily suppressed for 90 minutes as the Coach Samson Siasia-tutored side dug deep for victory.

It was Sadiq Umar that scored the first goal for Nigeria in the 6th minute off a rebound from an earlier shot from Imoh Ezekiel.

Unfortunately, Nigeria were pegged back within 100 seconds as Stanley Amuzie handed Japan an easy route back into the game when he committed a needless penalty and veteran Shinzo Koroki scored the equaliser for his team.

In a rather dramatic version, Nigeria were back in front and it was Etebo who scored the first of his four goals on the night as he masterfully controlled a cross from Shehu Abdullahi before slotting the ball in to the net.

The lead for Nigeria was short-lived yet again as slack defending saw Japan pull level this time through Takumi Minamino in the 13th minute.

After that, the goal rush was paused as both teams settled into the game and became more cautious.

That nonetheless, three minutes before half time Etebo ensured that Nigeria had the lead going in for the break as he made the most of the comical defending from the Japanese who failed to clear their line and gave him a second chance to tuck the ball into the net

The bad situation got worse for Japan barely five minutes into the second half as Nigeria doubled their lead when Umar was brought down in the box and the penalty awarded was buried in the net by Etebo to complete his hat trick.

The former Warri Wolves striker capped up a wonderful performance for Nigeria scoring the fifth goal from over 25 yards in the 66th minute having seen the Japan goalkeeper leave his line to clear an earlier cross from Captain Mikel Obi.

Japan were by no means willing to let go of the three points on offer and thus kept pressing on the weak Nigeria defence which was susceptible all through and while their efforts yielded two more goals it was not enough to deny Nigeria victory.

With the win, Nigeria are top in Group B after the first round of games as the other match between Sweden and Colombia ended 2-2.