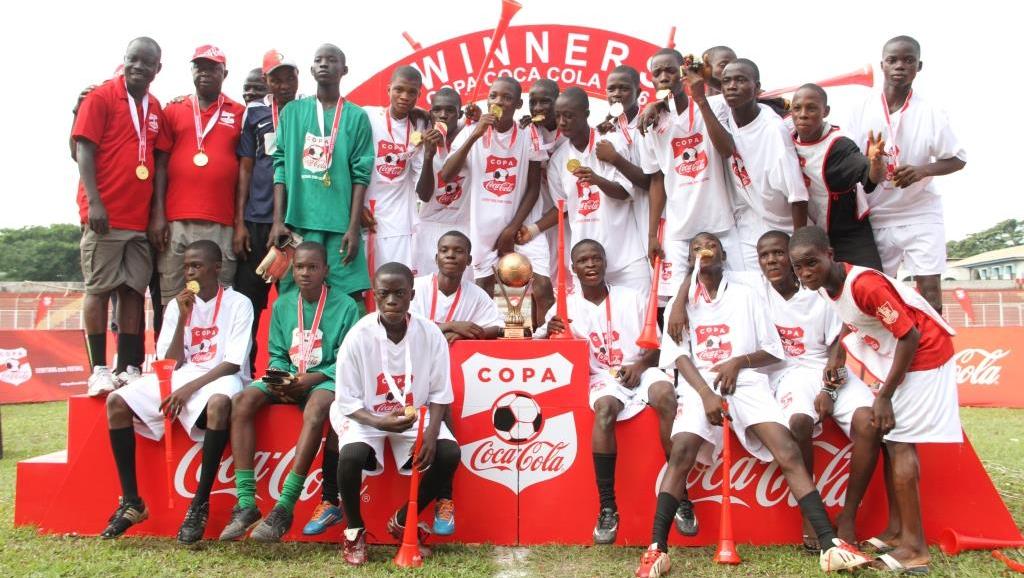 While Friday started like any other day, it proved to be unforgettable for Oyo State’s Asegun Comprehensive High School boys who won the 2016 edition of the intensely competitive Copa Coca-Cola tournament after defeating rival, National Grammar School, Nike, Enugu State, at the national final match played at the Onikan Stadium, Lagos Island.

Determined and focused all through the 60 minutes of play that ended in a goalless draw, both teams put up a strong spirited fight for the trophy and the prize money of a million naira, but in the end, the Asegun boys were able to pull through with a 5-3 win in a penalty shootout.

The match, which had in attendance top officials from the Lagos state government, the National School Sports Federation (NSSF), and Senior Staff of Coca-Cola, witnessed super engaging musical performance from the rave of the moments and 2016 BET Best New International Act Award winner, ‘Falz the bad guy’ as well as a surprise entry by Nigeria’s Football legend, Austin ‘Jay-Jay’ Okocha.

The former Super Eagles captain came disguised as an elderly janitor tricking both players and the spectators into believing he was just a regular cleaner who was going about his job and simply wanted to join in the game. Pulling a surprise with his quick moves and impeccable juggling and dribbling skills, Okocha had the young players in awe, before finally revealing himself.

Speaking of his appearance at the match, the football legend remarked that coming to the event provided him an opportunity to give wings to the passion and aspiration of the young players, by motivating them to reach for their dreams.

“Just like many football stars today, my football career began at the grassroots level. Today I am what I am because I had people who believed in me and gave me the opportunity to thrive. Copa Coca-Cola is doing just that, inspiring the next generations of Football players. And I am happy to be a part of a platform that is transforming grassroots football in Nigeria,” he said.

Basking in the excitement of the moment, 14-year-old Olanrewaju Fadipe, Captain of the winning team, enthused, “He is my all-time favourite, and I am still in shock that I just played with him. I will cherish the moment forever!”

Presenting the medals and trophies to the Asegun boys, the Managing Director, Coca-Cola Nigeria, Adeola Adetunji, congratulated them for their outstanding performances in the tournament, stating that their hard work and team spirit earned them the victory.

He said Coca-Cola would continually to create opportunities for talents to thrive.

“We are forever committed to unlocking the potentials of exceptionally talented teenagers because we believe in their passion. Some of the young men you see here today displaying all the amazing football skills would someday become our legends. Coca-Cola is proud to be a part of their journey towards stardom,” he remarked.

The Special Adviser to the Lagos Governor on Sports/Chairman Lagos State Sports Commission (LSSC), Deji Tinubu, said the success of Nigerian Football starts from the grassroots.

He lauded Coca-Cola for the football initiative stating, “Seeing a multinational company such as Coca-Cola throw its weight in support of grassroots football is highly commendable. More organisation should emulate this to augment government efforts in the area of sports.”

Every year, Copa Coca-Cola provides the springboard for young football talents to climb to express their passion as they aim for stardom. Thus far, Coca-Cola, through the initiative, has empowered thousands of Nigerian teenagers.

This year’s tournament featured a total of 3000 schools and 60,000 players from across 32 states of the federation.

Euro 2016: Germany through to semi final after dramatic win over Italy