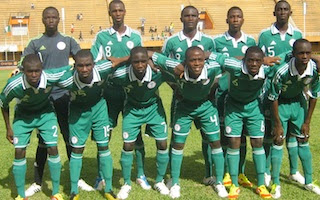 It was a visibly sober and sad moment as players and officials yet again mourned the death of another high-ranking football man following the death of Stephen Keshi on Wednesday.

Garba said Amodu’s death was not only tragic but a personal loss to him because it was under the watch of the late Super Eagles coach that he captained and won the FA Cup with El-Kanemi Warriors in the 1990s.

“This is a great loss to me,” Garba told thenff.com. “I spoke with Amodu just two days ago and we discussed about our screening, and I feel so sad that he has gone few days after we lost Stephen Keshi. Amodu was my coach at El-Kanemi Warriors when I captained El-Kanemi to win the FA Cup and we have remained ever so close ever since.

“He was a man with a reservoir of knowledge and we all enjoyed his presentation during the CAF License A Coaching Course here in Abuja and I can’t just believe Amodu is dead. I’m too sad over this loss and in his honour, we have to call off our training session today (Saturday) and God’s willing, we shall continue on Monday,” Garba informed.