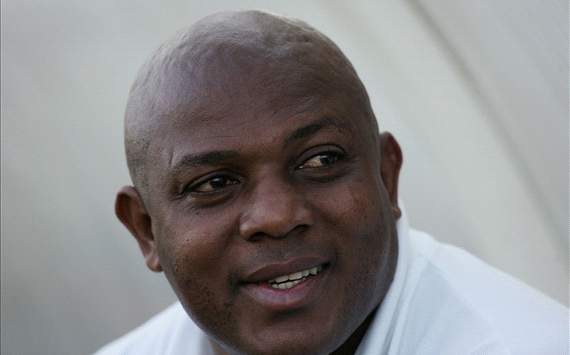 Former Super Eagles’ Coach, Stephen Keshi, died before he arrived Faith Mediplex, the hospital he was rushed to on Tuesday night, his brother in-law, Richard Aburime, has said.

The former captain and coach of the senior national died at the age of 54 on Tuesday.

Narrating Mr. Keshi’s last days on earth to journalists in Benin, the Edo State capital on Wednesday, Mr. Aburime said the late coach had a history of leg pains following years of successful professional football, which was usually managed with massaging.

He said following his last complains and subsequent massaging, Mr. Keshi’s body system and health suddenly degenerated as a result of which he was at about 11.30pm rushed to the hospital, which is about 20 minutes’ drive from his residence at Giwa Amu area of Government Reserved Area in Benin City.

“He had complained of pains in his leg for some days and they kept massaging it for him. When he complained of it yesterday, they massaged it for him again,” Mr. Aburime recounted.

“About one and half hours after the massaging, he was in serious distress and was gasping for breath. That was how we rushed him to the hospital, a distance of about 20 minutes.”

“But by the time he arrived at the hospital, the doctor certified him dead on arrival. That was between 11:30 and 11:45 pm.”

“It was the nurse that first came out. She checked for pulse‎ and said there was no more pulse in him. Doctors later came and do all the stuffs they do; but nothing came out of it.”

Reacting to reports that Mr. Keshi died of cardiac arrest, Mr. Aburime cautioned the media against speculating on what killed the coach.

He said only a proper toxicological autopsy to be conducted would determine the actual cause of the death of the late skipper of Super Eagles.

Mr. Aburime said after the doctors confirmed Mr. Keshi dead, they could not issue any report or present any death certificate because the late coach was not a patient of the hospital.

He said, “After the confirmation, as he was not a patient of the hospital, they could not write any report or present any death certificate. They said we must bring the police. So, the police came to inspect the body.

“I am about to take the corpse to Stella Obasanjo Hospital now, pending the autopsy the family wants to do. Dr. Wilson Akhiwu will conduct the autopsy.”

“There is no official statement as to the cause of his death. There will be no embalming. It was sudden and we don’t want anybody to speculate.

“That massage on his leg had taken one hour before the distress. There was no sign of ill-health (before) and Keshi had not complained recently.”

He assured that the autopsy report from qualified doctors would be made public at a press conference befitting Mr. Keshi’s status.

Meanwhile, family sources said the late footballer was scheduled to travel to the United States of America on Wednesday to visit his children, a plan which has now been aborted by his sudden death.

A cousin of the late coach, Ebuka Ofuoni, who is said to have lived with him from his childhood, said Mr. Keshi’s death is not only shocking but also a great loss to the family, his community and his country and the entire football world.

In a tribute, the Edo State Governor, Adams Oshiomhole, described Mr. Keshi’s death as a great loss to the nation and to Edo State, where he was resident.

In a statement signed by his Chief Press Secretary, Peter Okhiria, the governor described the late coach as a thoroughbred professional, complete gentleman, and a good citizen who impacted positively on his immediate environment where he lived a quiet life.

“On behalf of the Government and People of Edo State, I join millions of Nigerians and other sports lovers worldwide to condole with my brother, the Governor of Delta State, Dr. Ifeanyi Okowa, on the sudden death of this illustrious son of the state,” the statement said.

“He was a thoroughbred professional, a complete gentleman and a good citizen of Edo State where he lived quietly and peaceably with his neighbours before he gave in to the cold hands of death. His death is most painful not only to football lovers but to those whose lives he impacted positively.”

“While we mourn Keshi, we celebrate his many contributions in bringing joy to millions of homes across the nation and the world with his football skills which were honed during his days as a player with the defunct New Nigerian Bank (NNB) of Benin.”

“His name will undoubtedly be written in gold as a great Nigerian Ambassador who brought glory to the country and left an indelible mark in the sands of time.”

“I pray that the Almighty God will grant his soul eternal rest and his family the fortitude to bear this great loss.”

The Edo State Football Association, in its tribute, described Mr. Keshi’s death as a devastating blow to the entire football community in Nigeria.

“It is so devastating. At about 2am today (Wednesday),” its chairman, Frank Ilaboya, said.

“Keshi is someone that we all love. We all know him as the ‘Big Boss’. He is one player and a coach that is respected and will be missed.”

“As a person, he was very unique. As a captain, he was very exceptional. As a coach, he was the only one that has won the Nations Cup as a player and as a coach. His death is a big ‎vacuum in Nigeria, especially Delta and Edo States.”

“It is a vacuum in the football community. We thought that he was going to do more for Nigeria. But we cannot question God. What do we do? We pray that his soul rests in perfect peace.”

The EFA boss also narrated how he got the news about the demise of the coach.

He said, “I got a call from a US-based coach Dr. Terry Eguaoje that I should confirm what was happening to Keshi‎.

“At that time, I didn’t know what was happening. So, I quickly established contact with the in-law, Richard Aburimen, who told me that it was true. I was shocked.”

“To the best of my knowledge, I never knew that he was sick. That was why I said that it was so shocking. I know that he used to having this leg pain; may be, because of his playing days‎. But that is all I know,” Mr Ilaboya recalled.

Keshi’s former teammate and bosom friend, Augustine Eguavoen, described the late coach as “an achiever and a go-getter”.

“Aside being my team mate in the national team, Keshi and I have remained close brothers for years,” Mr. Eguavoen, who was Captain of Super Eagles, said in tears.

In his tribute, a former member of the Super Eagles, Edema Fuludu said, “We all know him as a good leader. He goes for what he believes in. He was very enthusiastic about Nigeria and football and he was never negatively minded. I am shocked and yet to come to term with this sad news.”

“He made us to believe that we can achieve whatever we want to achieve only if we set our mind on it. It is a sad loss to us all.”

The Edo State Commissioner for Information and Orientation, Kassim Afegbua, called for a national burial for Mr. Keshi, saying he deserved the honour as “a patriotic citizen.”