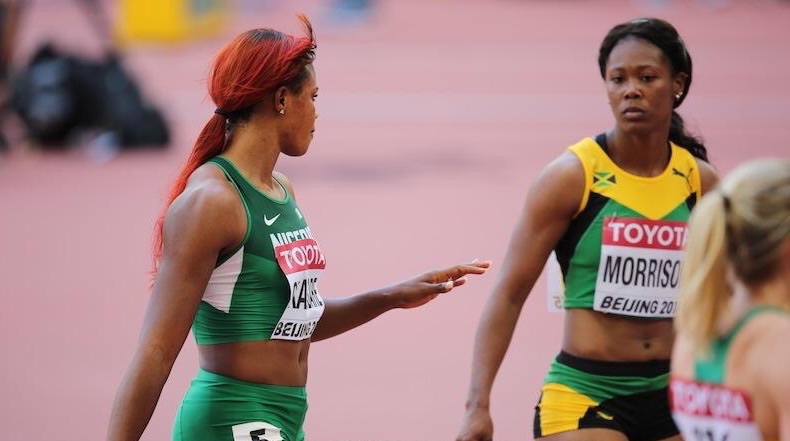 Nigeria’s last hope for a medal at the IAAF World Championships, which ends today (Sunday) in Beijing, China, came crashing as the country’s 4x400m Women’s relay team gave their all but could only finish 5th in Sunday’s final.

The quartet of Regina George, Funke Oladoye, Tosin Adeloye and Patience Okon ran the second fastest time in the semi-finals; and many were hopeful they could nick a medal in Sunday’s final.
However, that was not the case as Jamaica saw off the fierce contest from USA to win gold while the Americans settled for silver and Great Britain headed home with Bronze in the 4x400m Women’s event.
The finishing time of 3:25.11secs posted by Nigeria could only see them pick 5th spot.
While some would be taken aback at the no-medal finish by Nigeria at the World Championships, many will see the outcome as the expected end especially with the injury setback for the country’s brightest medal prospect Blessing Okagbare.

Before Okagbare performed well at the Moscow 2013 World Championships where she won a sliver and a bronze – Nigeria had gone 14 years with no medal at the biennial athletics meet. That momentary feat gave a false sense that the country’s athletics was back on track; but the true situation has now been brought to fore yet again in Beijing.

The last nine days in Beijing has elicited varying comments on the true state of athletics in Nigeria. While the country’s athletics officials maintain they are doing all within their limited capacity to raise the stock especially when confronted with the reoccurring problem of underfunding, the athletes on their part have hit the officials hard below the belt; going as far as labelling them clueless.

One of the athletes that has not hidden his disappointment on how athletics is currently being run is Triple Jumper, Tosin Oke, who finished amongst the world’s top eight jumpers despite claims of shoddy treatment by the AFN. Oke accused the AFN leadership of concentrating on one athlete at the detriment of the others.

“How can an athlete be receiving five digits every month and I get zero,” Oke queried.

Oke canvassed for a change in leadership style if Nigeria is to get it right at the Rio Olympics next year .

Aside Oke, Gloria Asunmu who is the current National 100m Women’s champion, did not spare the officials in the blame game.

“I am not disappointed we couldn’t scale through because this is what you get when you don’t prepare,” Asumnu told Complete Sports in Beijing.

She declared her unhappiness with the way the AFN went about the arrangement and wants a change.

“The federation should always be prepared. Put people in charge who know what they are doing. Up till the (national) trials in Warri (Maurice) Green (the former world and Olympic 100, 200m and 4x100m champion) has been our coach.

“But when we got here, we found out he is not. The team bonding and chemistry we had under him was destroyed. Everyday what we have been having here is confusion. This is not how to prepare for a world championships. This is embarrassing,” fumed Asumnu.

Far way in the United Kingdom, Olusoji Fasuba who is Africa’s fastest man ever, also learnt his voice to the growing debate.

Fasuba, writing on his facebook page, queried the investment made by the AFN on athletes whose best returns so far has been just in the African championships.

“Nigerian athletics has finally become a place where dreams are reduced to African championship and those that they deem can’t make a future thrown aside. But those thrown aside are taken at a young age by other countries and turned to world class in a couple of years.( unlike us who buy retired 100m runners to try and develop).

“The question I have now is, do we now have god’s running athletics in Nigeria?
He continued: “When a country like Kenya can produce world champions in the 400m hurdles, then hope is not lost for Africa.
“But when a country like Nigeria thinks African championship is the ultimate of all ultimate cause they refuse to give or have faith in their athletes at the world stage. Then my people we are lost as a country. How can my nation Nigeria move forward when they limit the abilities of the male sprinters by keeping them because they feel that they wouldn’t get a medal.
Going forward, Fasuba has promised to proffer ‘solutions’ in due course.
“I would put a suggestion that can or might help the people in charge to help athletics back home. It doesn’t need everybody to be there to do it,” the now British soldier stated.

While Nigeria licks her wounds of another poor show at the world stage, Kenya finished tops of the medal standings with 16 medals; seven of which were gold. Jamaica emerged second while the United States came third.