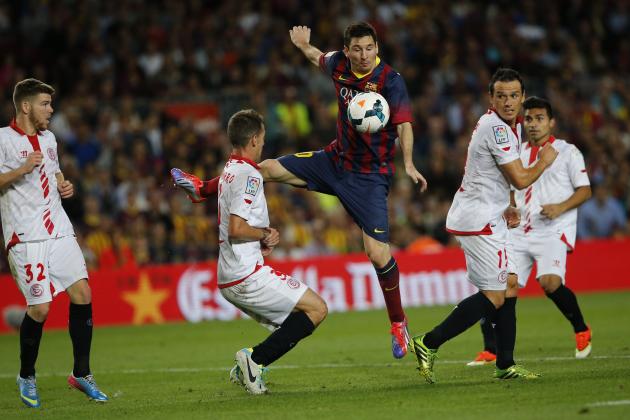 It was an evening of goals in Tbilisi as Barcelona and Sevilla shared nine goals in 120 minutes of the match.

It was 4-4 after 90 minutes but finally, after 120 minutes, the brilliance of Lionel Messi led Barcelona to beat Sevilla 5-4 on Tuesday at the Boris Paichadze Stadium in Tbilisi, to lift a record equaling fifth UEFA Super Cup.

The first 16 minutes say a flurry of brilliant freekicks that resulted in three goals.

The first was by Eva Banega in the third minute but Messi replied with two of his own – the first in the sixth minute and the second 10 minutes later to give the lead to the UEFA Champions League champions.

The equalizer was a gem – going in just under the cross bar. The second was also to the left of Sevilla goalkeeper, Beto floundering as the little genius confirmed his status.

The first half was in the last minute when Luis Suarez charged up the Sevilla box but Beto made a save off the Uruguayan but he did not give up the rebound and used it to set up Rafinha for the third goal.

The second half was just seven minutes old when the Sevilla defenders gifted Sergio Busquets, who rolled it to Suarez, who slotted under Beto.

At that point, watchers would have said it was going to end in a rout but Unai Emery’s team had other ideas.

Vitolo crossed for Antonio Reyes to reduce the deficit to 4-2 in the 57th minute.

Jeremy Matthieu then fouled Vitolo in the box. The French defender was shown a yellow card and a penalty awarded.

Kevin Gameiro drove it past Andre Ter Stegen. The improbable equalizer then arrived nine minutes from time as two substitutes – Ciro Immobile and Konoplyanka tapped in at the far post. That made it 4-4.

In extra time, Sevilla tried to hold on for penalties but from a free kick awarded to Barcelona six minutes from the end of extra time, Beto could only palm Messi’s shot, which took a nick on the way, but Pedro was following up and he blasted the ball high into the net.

Still, Sevilla would not lay down and had two golden chances to equalize – first from a Coke header which missed by inches and then Adil Rami diverted an Immobile cross wide off the mark.

At the end, Emery had gone 20 matches without a win against Barcelona as Messi was named Man of the match.

The UEFA Super Cup is played beginning of every new season between winners of the Champions league and UEFA cup winners.