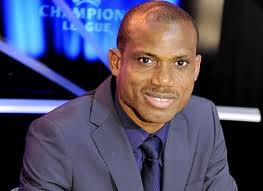 The Nigeria Football Federation has confirmed it is in talks with former Super Eagles’ captain, Sunday Oliseh, with regards to the vacant position of the team’s head coach.

At the weekend, the NFF terminated the appointment of another former captain, Stephen Keshi, over breaches of core terms of his contract.

Following the encouragement of a team of the NFF Technical and Development Committee that is working on filling the vacant position, Sunday Oliseh met with NFF President, Amaju Pinnick, in London on Tuesday.

“An offer has been made, and there is understanding, but we have to work out the final details of the agreement in a few days. Of course, the Executive Board has to give approval for his appointment based on the final terms to be agreed,” said Felix Anyansi-Agwu, chairman of the NFF Technical and Development Committee.

The NFF suggested Oliseh will come with a Foreign Technical Assistant, whose job description will centre around development programmes, and who will work with Clubs’ Youth Teams and certified academies towards developing the game from the grassroots.

Current stand-in Coach, Salisu Yusuf, will also be in the new team, but with greater devotion to the home-based team, otherwise known as Super Eagles B, and will be the interface between the technical crew and the home boys.

Oliseh is expected to come up with a five –year developmental plan to fashion a unique playing and coaching philosophy for all the national teams, and will, for this purpose, interface regularly with coaches of those teams.

“We are also looking at how he will periodically organize clinics and seminars for coaches of Clubs in the Nigeria Professional Football League, probably once in a month, so as to strengthen the playing philosophy across board. A robust youth development programme, elite player development strategy and performance programmes to drive higher standards, among other core sustainable development programmes, are also part of the proposal,” Anyansi-Agwu added.

Pinnick said: “Sunday Oliseh has vast experience and immense knowledge of the game, and will certainly add value to what we are doing. He has bought into our vision and objectives towards the development of Nigeria football. He will command the respect of the players and we trust he has the temperament to work harmoniously with the Technical and Development Committee, the Technical Directorate and the Technical Study Group.

“On our part at the NFF, we will give him all the support to succeed as we have been giving to all our coaches. Subject to the approval of the NFF Executive Committee, we will conclude negotiations by weekend and he will be unveiled next week.”

Oliseh, 40, is presently a FIFA instructor, and runs a consultancy that trains and assesses coaches worldwide. He is also member of FIFA Technical Study Group.

He was in the Nigeria squad that won the Africa Cup of Nations in Tunisia in 1994, and played in the 1994 and 1998 FIFA World Cup final competitions, with the Super Eagles reaching the Round of 16 in both. He was also in the Nigeria U-23 side that won Africa’s first Olympic football gold in Atlanta 19 years ago.

Oliseh played for Reggiana, FC Cologne, Ajax Amsterdam, Juventus, Borussia Dortmund, VFL Bochum and RC Genk in a magnificent professional career, during which he played under some of the best coaches in the universe.

He won 63 caps for Nigeria between 1993 and 2002, picking up Africa Cup of Nations gold, silver and bronze medals.