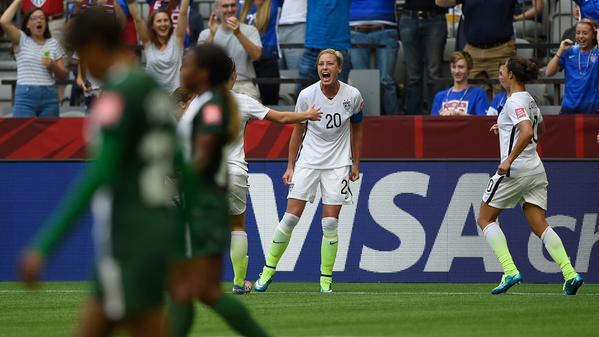 Nigeria’s national women football team, the Super Falcons, are out of the ongoing FIFA Women’s World Cup in Canada following their 0-1 loss to USA Wednesday morning.

The solitary goal which aided Nigeria’s exit came from an Abby Wambach volley seconds before half-time as the Americans held on to finish top in the so called Group of Death while it was the end of the road for the sleeping giants, the Super Falcons.

Going into Wednesday’s duel in Vancouver, the Nigerian women knew they were condemned to win if they were to progress and they did start brightly with Asisat Oshola close to getting the opener for the Falcons after an earlier goal by the USA was ruled offside.

The USA finally got in front moments before the half time whistle thus meaning the job for the Falcons just got harder.

The two-time world champions sustained the pressure on Nigeria in the second half and things became worse for the Falcons in the 69th minute, when Sarah NNodim picked up her second yellow card after bringing down Sydney Leroux just outside the area.

While it was end of the road for Nigeria who could only manage one point from three games, fellow African country Cameroon have sailed to the next phase after recording a 2-1 win over Switzerland.