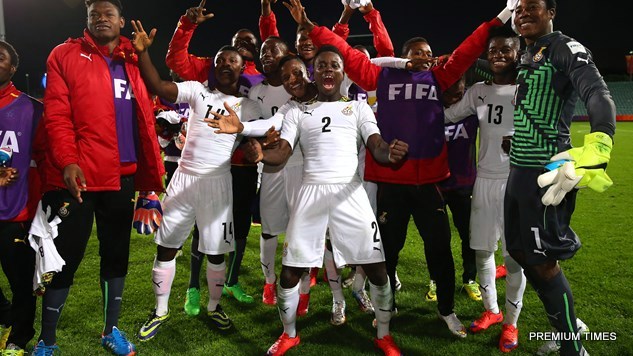 The Black Satellites of Ghana

FIFA U-20 World Cup: Ghana qualify for next phase

The Black Satellites, Ghana’s U-20 team has emerged Africa’s first team to make it to the knockout phase of the ongoing FIFA U-20 World Cup in New Zealand.

The West Africans required a late win over Panama (1-0), which came off the boots of substitute, Emmanuel Boateng, to book their place in the Round of 16.

They finished top of their group, amassing seven points from three games.

Ghana, the only African team to have won the FIFA U-20 World Cup, are hoping they can replicate their 2009 feat in New Zealand.

While the ambitions are quite high, the coach of the Black Satellites, Sellas Tetteh, admits that his team is still a work in progress and will need to get better as the tournament now gets to a crucial bend.

“Our opponents (Panama) surprised me today,” he told Fifa.com. “I was in shock simply because at the World Cup you see such different standards of performance, and today Panama played very well. It was a hard-fought game and the slightly better side won in the end. Now we have to prepare for the Round of 16. It’s going to be very tough now and our level of performance will need to rise. We have to try to work on our weaknesses.”

Meanwhile, as Ghana marches on to the next phase, six-time FIFA U20 World Cup champions Argentina are all but out of the ongoing tournament in New Zealand after Friday’s barren draw with Austria.

With just two points to their name, Argentina, ranked one of the favourites for the Youth World Cup, looks almost uncertain to nick one of the four best losers’ spot.

Austria finished second in the group behind Ghana on five points, with Argentina third.

Tennis: Not over for Nadal despite French Open ouster