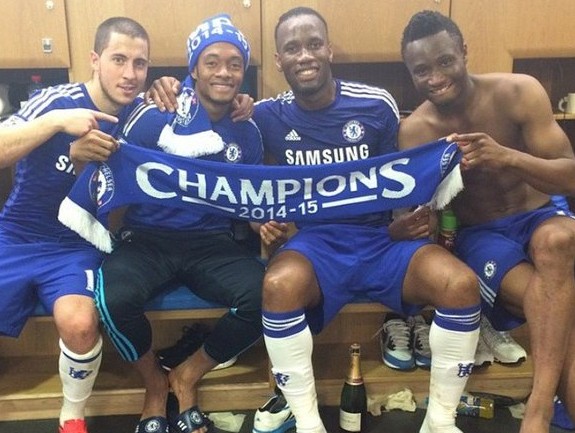 EPL Round-Up: Mikel crowned champion with Chelsea as Aluko goes down with Hull

It was a tale of different strokes for different folks on the final day of action in the English Premier League on Sunday as a Nigerian player, John Obi Mikel, was crowned champion with Chelsea while his compatriot, Sone Aluko, was relegated into the lower division with Hull City.

Mikel and his Chelsea teammates grinded a 2-1 win over Sunderland which saw them end the season with 87 points from 38 games; while for Aluko, the 0-0 draw against Manchester United was grossly inadequate as their total points tally for the season was 35 which meant they were relegated alongside Queens Park Rangers and Burnley.

There was also plenty to cheer for another set of Nigerians, Osaze Odemwingie and Sammy Ameobi, whose respective teams, Stoke City and Newcastle United, signed off the season on a winning note.

Odemwingie who had an injury plagued season was all smiles as Stoke City pummelled Liverpool 6-1, while for the younger of the Ameobi brothers, their EPL status was secured with their 2-0 win over West Ham United.

Elsewhere, Frank Lampard wrapped up his Manchester City career with the opening goal before Sergio Aguero netted to give Manuel Pellegrini’s men a 2-0 win over Southampton at the Etihad on Sunday afternoon.

Also, Theo Walcott hit a first-half hat-trick as Arsenal ended their season in style with a 4-1 win over West Bromwich Albion at the Emirates on Sunday.

Despite already confirmed relegated, Burnley signed off their Premier League campaign with a 1-0 victory over Aston Villa thanks to a goal from Danny Ings.

INTERVIEW: How to develop football in Nigeria – Onigbinde