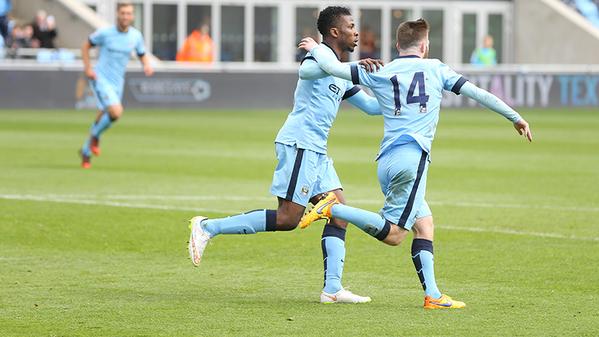 Flying Eagles star​, ​Kelechi Iheanacho​,​ gave yet another glimpse of what to expect from him at the FIFA U20 World Cup as he scored two goals for Manchester City U-21 side in Saturday’s 3-1 win over the U-21 team of Manchester United.

Iheanacho​,​ who has enjoyed a rich run of form since returning from injury​,​ first restored parity for his side in the first half after Ashley Fletcher had put the visitors ahead.

The Nigerian youngster then sealed the victory in the 80th minute with an amazing curler.

Though initially tipped to take his bow for Manchester City’s senior team on Sunday against Southampton, Saturday’s appearance means​ ​Iheanacho will not be making his Premier League debut this season anymore.

After his heroics for his club, Iheanacho is expected to link up with the Flying Eagles squad for the FIFA U-20 World Cup in New Zealand on Monday.

Nigeria will be starting out against Brazil on June 1 and Iheanacho is one of the players the Flying Eagles Technical Crew will be banking on to deliver the needed goals that would guarantee a good start at the New Zealand tournament.