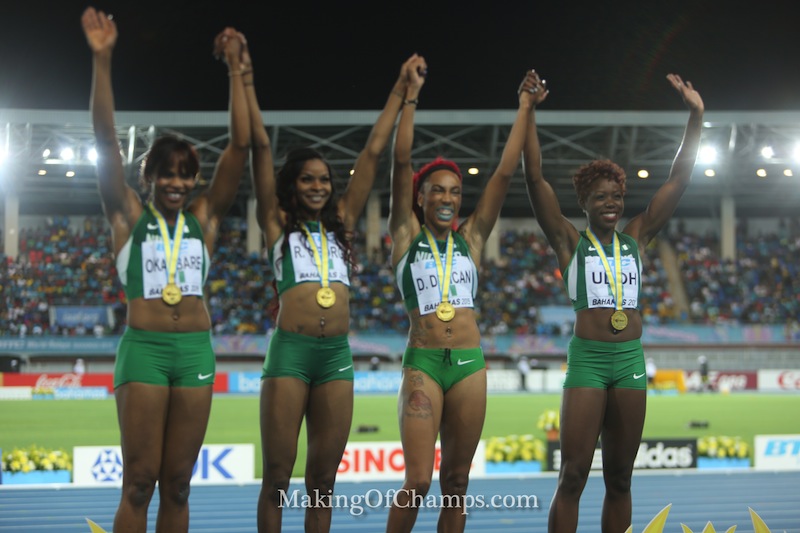 Nigerians on Sunday expressed delight over the performance of the country’s 4x200m women’s team at the ongoing IAAF/BTC World Relays in Bahamas.

They told the News Agency of Nigeria in separate interviews in Lagos that it was a good development, saying that the women’s team have been doing the country proud.

Omatseye Nesiama, the Technical Director, Athletics Federation of Nigeria, AFN, said on phone that he was very delighted at the performance, saying it was worthy of commendation.

“I am very delighted at the performance of our women winning the 4x200m relay in a world leading time of 1:30.52s ahead of all the participating nations such as U.S.A, Jamaica, Bahamas, France, Germany, China and Ireland.

“I had said it before now, that we could rely on these women to showcase our prowess in the relays and they have not disappointed me.

“The quartet of Blessing Okagbare, Regina George, Dominique Duncan and Christy Udoh did the job in that order.”

Mr. Nesiama, a retired commodore, said Nigeria had to withdraw from the men’s 4x100m due to visa issues and ill-health of some athletes, saying that some 400m sprinters would be selected to complete the 4x100m men relay.

“Unfortunately, visa issues and ill-health of some of our athletes robbed us again of getting our full strength on the ground in the Bahamas.

“This caused us to put up a no show ‘scratch’ from the men’s 4x100m and we would now use some 400m runners to complete our 4x200m men’s event for tomorrow.

“For example athletes such as Ogho-Oghene Egwero, Oghenetega Odele, Rilwan Fasasi and Tosin Adeloye could not make the trip which could have given us more opportunity. ”

Yusuf Alli, a gold medalist at the 1990 Commonwealth Games in New Zealand, said it was a very good development for the country.

“It is a very good development. I am very happy because it is an improvement which is very good for us. That is what we have always been clamouring for, for us to do well.”

Alli, however, urged the men’s team to take a clue from the women, saying that they need to be more steadfast in their career.

“The men’s team need to wake up and be up and doing.

“The women have surpassed their own standard; they are not behaving like athletes that are fully committed.

“They feel that they are not many; no competition between the men unlike the women who are many. They want to make the list and compete like it’s the last.”

An athletics coach at the University of Benin, Kayode Yaya, said the women’s performance was indeed a good hint that the country still had the right attitude to rule the world.

He said the quartet had done the country proud at the world level.

Nigeria were the surprise victors on Saturday, winning in 1:30.52 to take two seconds off the national record they set earlier this year.

World bronze medalist, Blessing Okagbare, led the team off before the baton was passed to Regina George, Dominique Duncan and Christy Udoh.

Jamaica finished a distant second in 1:31.73, one-and-a-half seconds slower than their time from last year, but one place higher on the podium.

USA looked to be on course to successfully defend their title from last year, after Shalonda Solomon, Kimberlyn Duncan and Jeneba Tarmoh had built up a comfortable lead on the first three legs. But then, disaster struck on the final change-over between Tarmoh and Allyson Felix.

The Olympic 200m champion couldn’t quite get a solid grip on the baton as Tarmoh then bumped into her before Felix fell to the ground; their medal hopes dashed.