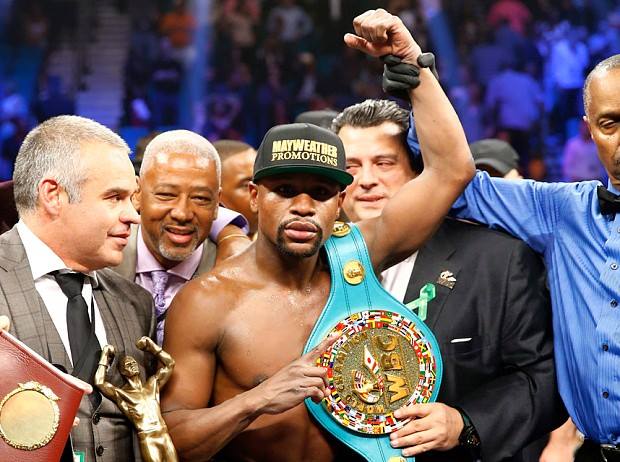 Floyd Mayweather after his 48th win

Super Eagles stars who were among the millions of fans that kept vigil to watch the much anticipated boxing fight have reacted to Floyd Mayweather’s performance against a subdued Manny Pacquiao at the MGM Grand Garden Arena on Sunday.

Some of the Nigerian footballers admitted on their twitter handles that the ‘Money Man’ did enough to win the bout.

“Mayweather was just better the second half of fight,” Bright Dike tweeted via his handle @bbright19.

“I’m a calculated fighter” says it all. Well done champ,”Ujah wrote via @ujah_9.

For the fighters themselves, Pacquiao said he thought he did enough to win the bout .

“I thought I won,” Pacquiao said in the ring post fight. “He didn’t do nothing, just moved outside. I got him many times.”

“He is moving around and it’s not easy to throw a lot of punches if your opponent moves around. I can handle his power, it’s not strong like other opponents. It’s not about size. I’ve been fighting bigger than him and it’s not a problem.”

Understandably, the victorious Mayweather — as well as most ring-side observers submitted that victory was earned fair and square

“I was a smart fighter, I out-boxed him,” said Mayweather, shaking off boos from the crowd which was unimpressed with his defensive style.

“We did what we had to do tonight. I knew he was going to push me. He had moments in the fight but I kept him on the outside.”

“He’s a hell of a fighter. Now I see why he is one of the guys at the pinnacle of the sport of boxing.”