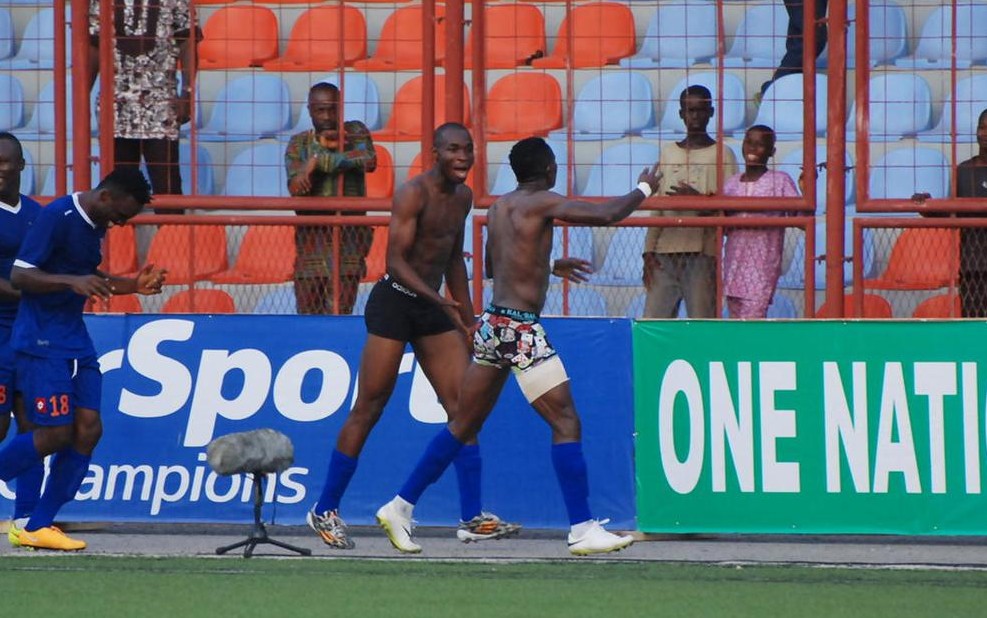 ​​​​Sunshine Stars duo gets ban ​​​for​ ​”stripping” during ​goal celebration

Super Eagles defender, Ebenezer Odunlami, and his Sunshine Stars teammate, Prince Aggrey, have been slammed with a one-match ban and a N50,000 fine for ​”​stripping​”​ during a wild jubilation in last weekend’s League match against Dolphins FC.

The League Management Company, through its official twitter handle​,​ announced the punishment for the duo who took off all they were wearing and were left with boxers after Sunshine’s late controversial winning goal against Dolphins FC on last Sunday .

Odunlami was part of the Nigeria squad to the 2014 African Nations Championship team where he started every game and made the tournament’s Best XI as the team placed 3rd.

However with this LMC hammer, Odunlami and Aggrey are set to miss this week’s star match against champions Kano Pillars.

For many, the punishment by LMC for the Sunshine Stars players are by no means overboard as the case of Denmark’s Nicklas Bendtner readily come​s​ to mind​.​

The former Arsenal ​star ​was also banned for one match and fined 100,000 euros (£80,000) by UEFA for his goal celebration against Portugal.

He lowered his shorts to reveal his underpants after scoring the second of his two goals in the 3-2 defeat.

The case of the Sunshine players is even worse as shown in the picture.​