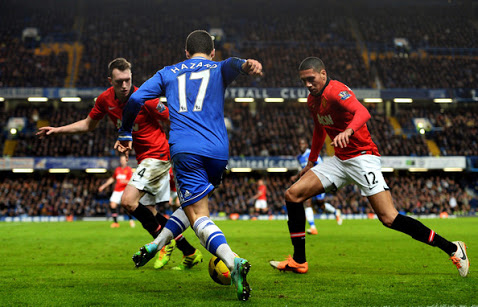 Chelsea’s chase for the EPL title this season got a big boost on Saturday as the Blues secured a vital lone goal win over Manchester United, meaning they now have a 10-point cushion at the summit of the EPL table.

Belgium international Eden Hazard got the only goal for Chelsea as he found the back of the net in the 38th minute to take his tally of goals to 13 this season.

Chelsea now have 76 points from 36 games, while Arsenal who are in second place have 66 points from same number of games like the blues.

Meanwhile, Nigerian striker Victor Anichebe was also on parade from start to finish as West Brom secured a crucial 0-2 away win over Crystal Palace on Saturday at the Selhurst Park in one of the day’s EPL clashes.

The win has helped eased the relegation worries of the Baggies who hitherto had lost their last three matches.

The visitors had the perfect start to the game as they took the lead in the second minute as Saido Berahino did well to win a corner. From the resulting cross, James Morrison rose highest in the area to power Chris Brunt’s cross past Julian Speroni.

West Brom had a strong appeal for a penalty turned down when Anichebe raided into box, and he was caught by leg of Mile Jedinak, but the referee waived the claims away.

After the break, West Brom managed to double their lead when Craig Gardner scored his second goal in as many games as he lined up a strike from 30 yards and his effort sailed into the top corner past the outstretched hand of Speroni.

Berahino nearly sealed the match for the visitors when he weaved his way through the Palace defence into the area, but his low strike was well saved by Speroni, but the Baggies held out for the crucial win.

In other games, Everton beat Burnley 1-0 while Leicester defeated Swansea 2-0, and Stoke City, without the Nigerian duo of Victor Moses and Osaze Odemwingie, beat Southampton 2-1.

INVESTIGATION: Evicted And Abandoned: How The World Bank Broke Its Promise To Protect The Poor