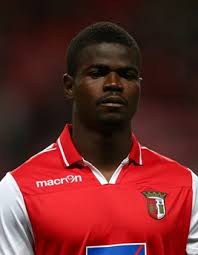 Super Eagles defender, Elderson Echiejile, has arrived in London with his Monaco teammates ahead of Wednesday’s UEFA Champions League Round of 16 first leg clash against Arsenal.

Echiejile is part of the 20-man Monaco squad hoping to shock the Gunners at the Emirates on Wednesday night​,​ and the Nigerian defender is set to play a key role following the long list of injuries in the backline of Monaco.

The Super Eagles defender is no stranger at the Emirates as he was part of the Monaco team which,​ at the beginning of the season​,​ beat the Gunners on their home ground in the Emirates Cup.

While Echiejile and the rest of the defenders take charge at the back, former Tottenham, Manchester United and Fulham striker​, ​Dimitar Berbatov​,​ is expected to spearhead their attack.

The Bulgarian striker is very much remembered with affection for the 46 goals he scored for Arsenal’s local rivals Tottenham Hotspur in a two-year spell at White Hart Lane before a £30m move to Manchester United in September 2008.

Monaco has played English sides 10 times, winning five and losing two, but this is their first competitive game against Arsenal.

Interestingly, current Arsenal Coach Arsene Wenger was one time the Coach of Monaco