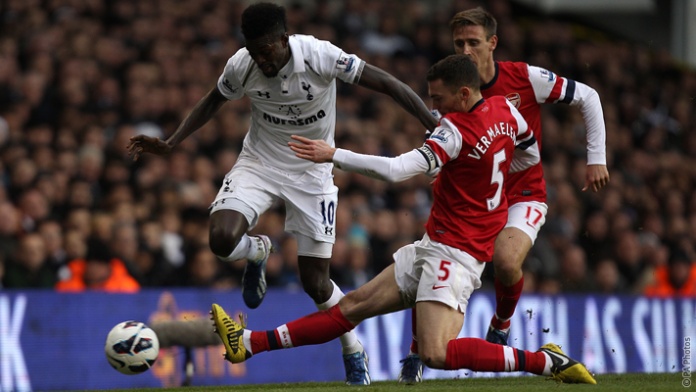 Tottenham in their game against Arsenal

Tottenham Hotspurs came from a goal down to beat city rivals Arsenal 2-1 in the Northern Derby that was played at White Hart Lane on Saturday afternoon.

Harry Kane netted a brace in the thrilling fixture to give Spurs the crucial win over the Gunners in the 180th Northern London Derby.

It was the Gunners that scored first as they were one goal up as early as the 11th minute when German star, Mezut Ozil, broke the deadlock.

The goal for Arsenal came despite Spurs doing more of the play and were only denied by the heroics of goalkeeper, Ospina.

Despite the barrage of attack, Arsenal were able to keep the lead going into the second half.

Spurs finally got reward for all their efforts in the 56th minute when man of the moments Harry Kane tapped in from a corner kick to register his 21st goal of the season.

There was much firepower afterwards from both teams and while it was looking like another drawn game like it has been in most occasions, Kane was on hand to do the magic as he fired in the winner in the 86th minute.

With this three points, Spurs have jumped to fourth spot on the log while Arsenal drop to sixth place.