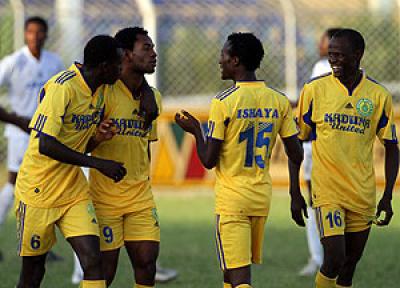 The players of Kaduna United FC on Wednesday appealed to the management of the club to pay their one year salary arrears for 2013/2014 season.

The Assistant Captain of the team, Ali Adam, said in Kaduna that some of the players had left because of the non-payment of the salary arrears.

Mr. Adam said that those still with the club had vowed not to commence training until their salaries were settled or they receive concrete assurances of prompt payment.

“Most of us are bread winners of our family; we now work without motivation. We protested peacefully to tell the government about the hardship we are facing but no response,” Mr. Adam said.

“We have been suffering since the 2013 Glo Premier league season, and this made the club to be relegated to the lower division.

“The players could not play well because they were thinking of how to survive. We are very sad because life has not been easy for us and some of us are students who struggle to pay our school fees.

“When you work without being paid, how do they expect you to survive and play well?’’

Mr. Adam noted said that “most clubs have started training in preparation for the new season except Kaduna United’’.

The players of the Nigerian premiership club, owned by the Kaduna State Government, played throughout the 2013/2014 season without salaries.

The Chief Coach of the club, Barnabas Saleh, said the state government had approved the money to settle the salary arrears but the money had yet to be released.

“We hope to start training as soon as we get the money,” he said.

He expressed the hope that the players would get enough motivation this season that would take the club back to the premier league division.