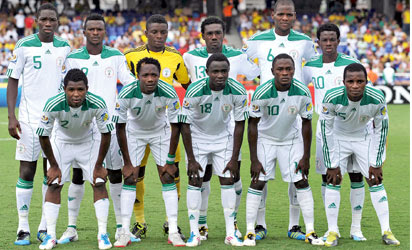 Nigeria’s U20 team, the Flying Eagles, are beaming with confidence ahead of the Africa Youth Championships, AYC, billed for Senegal in March after they finished tops at the just concluded the pre-season invitational Super 4 tournament.
The Flying Eagles face a tough first round hurdle in the AYC as they are grouped along with hosts Senegal, Cote d’Ivoire and Congo.

However, with their superb display in Abuja in the past week, many believe the Flying Eagles will not disappoint in Senegal.

The Coach Manu Garba tutored-side were unbeaten in five matches and only recorded a 3-3 draw in their final game against the Dream Team VI on Sunday having defeated the quartet of Enyimba, Kano Pillars, Warri Wolves and Dolphins FC.

Awoniyi, who has a pre-contract with Swedish club Kalmar, scored two goals for the Flying Eagles and his all-round play was exceptional.

He is expected to sign a professional contract with the Swedish club in August, when he turns 18.

He featured at the 2013 FIFA U17 World Cup, which Nigeria won in style.