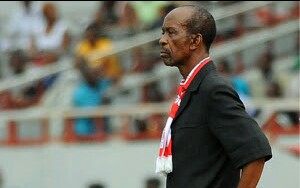 The Head Coach of Kano Pillars FC, Okey Emordi, has denied being under pressure to win this year’s CAF Champions League.

Speaking to journalists on Saturday at the Super Four tournament, the former Enyimba Coach, who is one of the two Nigerian coaches ever to win the prestigious Africa club tournament, explained that his team is not worried about participation in the CAF Champions League.

“We are not under pressure, we have a mindset both as coach and players, it will be difficult but we are not pressurized,” he said.

Coach Emordi also confirmed that Pillars will head to Ghana after the Super Four tournament in Abuja for friendly matches to prepare them for the next season.

“Yes, We will go to Ghana to play friendly matches, we want to prepare ahead of the next season,” the coach who won the Champions League with Enyimba said.

Despite talks of a poor display, Kano Pillars started their campaign at the Super Four Tournament on a winning note as they defeated Dolphins FC 2-0.

All participating teams will rest on Sunday and continue with the pre-season tournament on Monday.