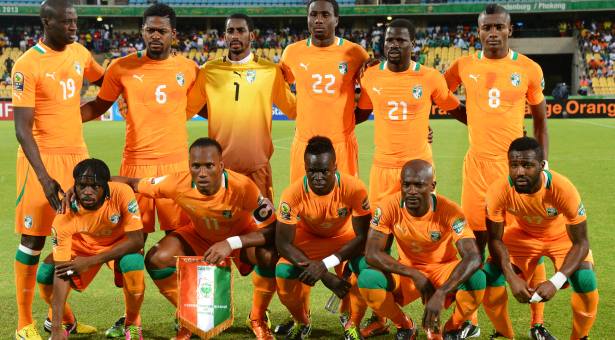 The even contest at the ongoing Africa Cup of Nations continued with another draw recorded in the Group D clash involving Ivory Coast and Guinea ending in 1-1 after 90 minutes of pulsating action.

The stalemate recorded on Wednesday evening means only two matches have produced clear winners as others have all ended in draws in the AFCON 2015.

Avoiding defeat was no mean task for the Elephants who were reduced to 10 men after Gervinho was shown the red card in the 58th minute​,​ and they were already a goal down in the 36th minute.

Starting rather on a cagey note, the first proper chance of the game arrived​i​n ​the ​18​th​ minute when Gervinho’s effort was tipped onto the crossbar by goalkeeper Naby Yattara.

The striker did cause the Gu​i​nea defense much headache but ended up being sent out for an off-the-ball incident.

After failing to bury the chances that came their way, the Ivorians were made to pay for those squandered opportunities on 36 minutes as Mohamed Yattara put Guinea in front with a powerful finish inside the box after Serge Aurier had failed to clear his lines.

Seen as one of the firm favourite to dethrone Nigeria, Ivory Coast started the second half positively before their cause was hindered by a red card for Gervinho.

Down to 10 men, the task became harder for Ivory Coast who almost found themselves two goals down on the hour when Ibrahima Traore curled the ball onto the crossbar following a run into the penalty area.

Reprieve finally came for Ivory Coast as they got the equaliser with 19 minutes left as Seydou Doumbia found the back of the net after good work from Manchester City teammates Yaya Toure and Wilfried Bony.

Though they clawed their way back, Ivory Coast could have again found themselves on the back seat but the Gunieas were unlucky with their final touch as the game ended all square at 1-1.

Buhari to speak Wednesday over his qualification for election