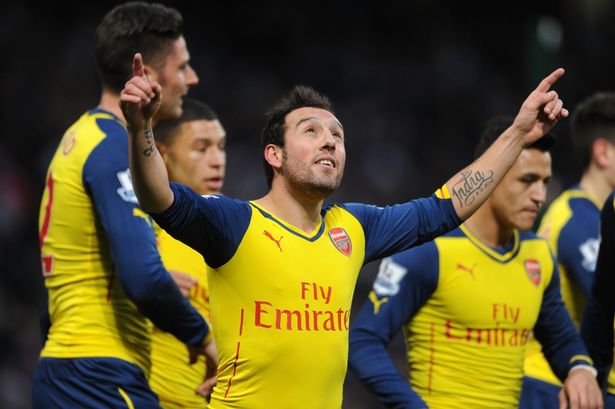 Arsenal, Sunday evening, ended Manchester City’s 15-match unbeaten run as they romped to a 0-2 win at the Etihad stadium.

A goal from Santi Carzola in the first half from the penalty spot and another from French striker, Oliver Giroud, in the second half saw Arsenal cruise to a big away win which has positively affected their position on the EPL table.

After a flurry of missed chances by the two teams, Arsenal found themselves in front when Cazorla’s well-taken spot kick in the 24th minute could not be stopped by goalkeeper Joe Hart.
It was returning City skipper, Vincent Kompany, who body-checked Nacho Monreal to gift the glorious chance.

From then on, Arsenal held firm to the lead and later found an all-important second with a little over 20 minutes left to play when Giroud, played onside by Frank Lampard, guided Cazorla’s dinked free kick beyond Joe Hart.

In the earlier game on Sunday, it was all gloom for Nigeria’s Sone Aluko who despite his hard work could not help Hull City from crashing to a 3-0 defeat in the hands of West Ham United at the Upton Park.

The defeat means Aluko and his teammates stay rooted in the relegation zone in 18th place with a paltry 19 points from 22 games.