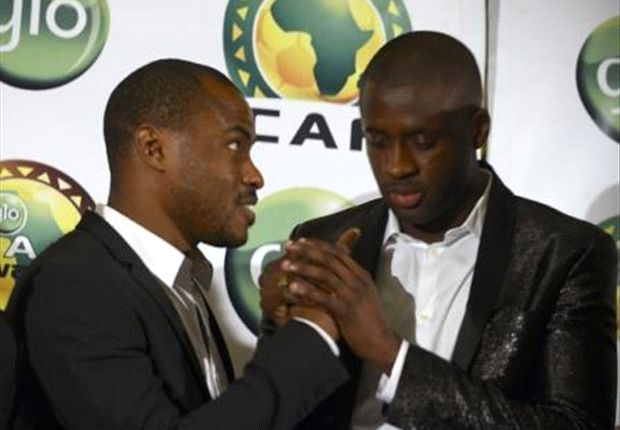 Super Eagles Captain, Vincent Enyeama, has congratulated Yaya Toure of Cote d’Ivoire for emerging the 2014 African Footballer of the Year for the fourth consecutive time.

Enyeama said this during a press briefing held immediately after the Glo/CAF Awards at the Eko Hotel and Suites, Lagos, on Thursday night.

Cote d’Ivoire and Manchester City midfielder, Toure, won the award for the fourth time in a row.
Enyeama came second ahead of Gabon and Borussia Dortmund FC of Germany attacker, Pierre-EmerickAubameyang.

“I’m not a bitter loser, I’m not bad. Big congratulations to Yaya and we respect him. Qualifying or not qualifying, it doesn’t count. It pains me that Nigeria is not going to be at CAN but for the award, I support the decision of tonight, a big congratulation to him and I thank God for him.”
Meanwhile, the President of the Nigerian Football Federation, NFF, Amaju Pinnick, who was present at the event, declared that Nigeria was very proud of Enyeama in spite of not winning.

The NFF president, however, said that he would have preferred the Super Eagles captain to win the prize because he was the only goalkeeper in the top three, “which is no mean feat.”

“I just feel that it might be a very subjective reason to have a goalkeeper in that category, that goalkeeper easily would have been given that privilege of winning the African Footballer of the Year,” Mr. Pinnick said. “Because you rarely see a goalkeeper being selected among the three best in the world. But of course, we are excited that he finished top three, which means that he is Number 2 in Africa and he will work hard.

INEC to publish voters​’​register on Tuesday