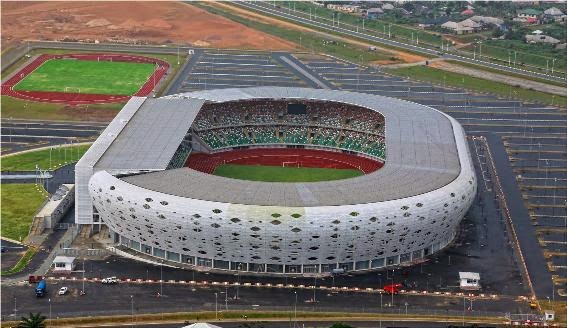 Two persons were feared dead and 20 others injured in a stampede at the entrance of Akwa Ibom International Stadium on Friday during its inauguration.

The News Agency of Nigeria (NAN) reports that crowd control was a difficult task in spite of the road blocks mounted some kilometres away from the stadium.

Although the spectators got tickets to enable them access the 30, 000 capacity stadium, the crowd started thronging the stadium about five hours ahead of the scheduled time for the match.

Confirming the incident, the state Commissioner for Health, Dr. Emem Bassey, told NAN that two unconscious persons were taken to an undisclosed hospital.

“I was told that two persons have been taken to the hospital; these are perhaps people who were fighting at the gate in their bid to enter the stadium,” Dr. Bassey said.

He said that the third unconscious person, a woman, was revived in the stadium and had started talking.

“It should be expected; this is the first time this is happening, everybody is excited, everybody wants to enter the stadium.

“We have 150 medical personnel in this place and eight ambulances. All our medical teams are up and doing and all the clinics are manned,” Mr. Bassey said.

NAN reports that the security operatives at some check points were using horse whips and teargas to control the crowd.

Contacted, the state Commissioner of Police, Isaac Achong, however said, “there was no stampede, there was only crowd control. We are only controlling the crowd entering the stadium.”

When told that journalists at the stadium reported a stampede, he said, “I’m not aware” and terminated the call.

An international friendly  between the home-based senior national team of Nigeria, Super Eagles B, and the U-23 National Team of Ghana, the Black Meteors, was fixed to mark the opening of the stadium.

“It is possible football fans were scrambling to enter the stadium to watch the match. That’s what I heard,” an Uyo resident, who said he was on his way to the facility, said.

The President of Ghana, John Mahama and the Ivorian Head of State, Alassane Ouattara were all expected in Uyo to open the new edifice.

Apart from Presidents Jonathan, Mahama and Ouattara, a number of governors from across Nigeria are expected, while the President of the Nigeria Football Federation, Amaju Melvin Pinnick and some Executive Committee members and Management staff arrived Uyo on Thursday evening.

The 30,000 – capacity venue, with a bullet –proof State Box that has 70 seats, has been described by the Vice President of Ghana Football Association, Fred Crentsil (who was sent by CAF to inspect the venue) as being “among the best you can find anywhere in the world”.

Governor Godswill Akpabio, who is the chief host, is showcasing the majestic facility, which has already been approved by the Confederation of African Football for the crucial 2015 Africa Cup of Nations qualifier between Nigeria and South Africa on November 19, as one of the key infrastructure he has delivered for the oil-rich State.