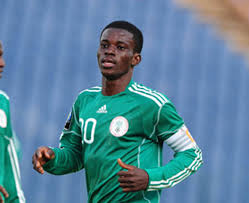 Azeez was part of the Super Eagles team to the last World Cup in Brazil.

Ramon Azeez, a mid-fielder with the Almeria of Spain, may soon swell up the number of Nigerians playing in the lucrative English Premier League as he has been linked up with a possible move to Welsh side, Swansea City.

Azeez who was part of the Super Eagles team to the last World Cup in Brazil currently plies his trade in Spain with modest outfit Almeria and according to the Daily MailSwansea are weighing up a move for the £3million-rated midfielder.

The 21-year-old Nigerian scooped the Young Player of the Year Award at his La Liga club last term as many recount the wonder goal he scored which helped a long way in his team escaping relegation last season.

Azeez is seen as dynamic midfielder and has been highly-rated within the Super Eagles camp for some time now.

He began his career in the Almeria B team but after two terms of rapid improvement, he was promoted to the senior team.

Swansea is keen to inject some class and athleticism into their team, and with Azeez’s technical skills they know he will he fit seamlessly into their style.

Almeria have inserted a release clause in the midfielder’s contract but the Swans see that as value for money for a player that was voted the third best at the Under-17 World Cup in 2007, and captained Nigeria to the quarter-finals of the Under-20 competition three years
later.

If the move sails through, Azeez will be joining compatriots like Victor Moses, John Obi Mikel, Victor Anichebe and the likes who have in their own way carved a niche for themselves in the most followed football league in the world, the EPL.

Out in Abuja: Art gallery-hopping