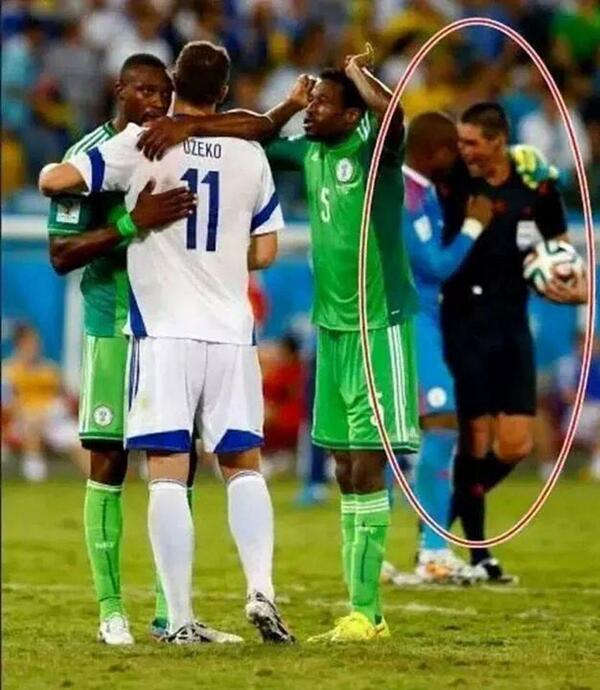 A petition has been initiated to demand the sack of the referee.

A picture showing the officiating referee, in the match‎ between Nigeria and Bosnia Herzegovina, celebrating Nigeria’s victory has led an angry fan to start an online petition. The petitioner is asking FIFA to sack the referee and change the scores to 1-1 draw.

The petition, titled “Fire Peter O’ Leary from his Referee job and‎ change result on Bosnia-Herzegovina v Nigeria to 1 v 1.”, was started‎ by Kraxon UO and already has over 23, 000 signatories.
‎
In a shot, New Zealand Peter O’leary, was seen in a congratulatory hug‎ with Nigeria’s goalkeeper, Vincent Enyeama, after the game had ended 1-0 in favour of Nigeria.

O’leary had ruled a 20th minute Edin Dzeko goal as offside. A close look at the replays showed it was a wrong‎ call leading most Bosnians and other football fans to rebuke the‎ referee, suspect his officiating, and ask FIFA to send him home.

The result sent Bosnia ‎out of the Brazil 2014 World Cup, while Nigeria only needs a draw in her last match against Argentina to qualify for the second round.

Nigeria, just before the World Cup started, was embroiled in a series‎ of match-fixing scandals.

In May, Nigeria’s friendly with Scotland was suspected‎ of match fixing and is currently being investigated.

The Nigeria Football Federation, NFF, has continuously denied the match-fixing allegations and termed them malicious.

One year after, Wizkid, Wande Coal fail to release albums