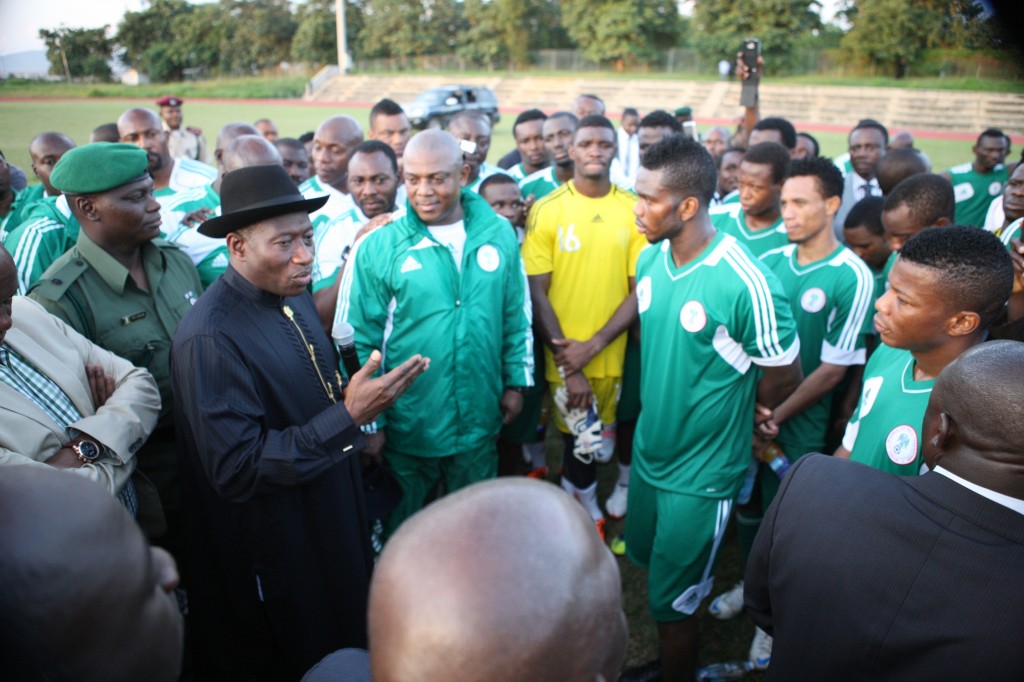 Nigeria’s team to the World Cup is arguably the biggest in Africa, and one of the largest in the world.

If the mega-size team had any chance escaping public attention, a similar presidential delegation announced by United States President Barack Obama, sealed it.

Mr. Jonathan’s team comprises governors, ministers, federal lawmakers and diplomats- totalling more than a dozen; while Mr. Obama’s has an advisor, a diplomat and two former athletes only.

An advance team was led by the Minister of Sports, Tamuno Danagogo.

The team’s official mission, a statement by the sports ministry said, was to convey “a presidential message” to the Super Eagles in Campinas Thursday morning ahead of Nigeria’s first group match against Iran, on June 16, in Curtiba.

The team was led by Daniel Pfeiffer, Senior Advisor to the President.

It is not clear yet how much the Nigerian government has budgeted for the World Cup. Details of that spending are curiously missing from the 2014 budget of the Nigerian Football Federation.

The president’s official team is exclusive of lawmakers and several other government officials who also travelled to Brazil, still on government cost.

For the London Olympics for instance, five Senators and five House of Representatives members made the official sports ministry team.

The officials received far more money than the athletes at the London Olympics, according to details seen by PREMIUM TIMES.

Since taking office in 2010, Mr. Jonathan has managed to build a notorious reputation for travelling for international events with huge entourages that often put him up for stinging criticisms.

In 2010, the president reportedly travelled with 120 people to New York.

In February 2013, officials who travelled with the president for an African Union meeting in Ethiopia, averaged 200, making the Nigerian delegation the largest to the meeting.

In September 2013, at least 600 Nigerians travelled to New York alongside the president for the United Nations meeting.

When concerns flared about the outsize team- which had clearly irrelevant members such party officials and ex-militants- the presidency scrambled a denial, saying those who travelled officially with the president were less than 30.

The response, in a statement issued by spokesperson, Reuben Abati, however admitted more people were in New York, but said they were there “for their own purposes”.

This time, though, Nigeria appears not alone.

One transparency organization in Ghana, Alliance for Accountable Governance, was quoted as describing Ghana’s 13-person delegation as Africa’s biggest, calling it “profligate and unnecessary”.

But the bulk of Ghana’s 13-person team are members of the country’s football federation and the sports ministry.

That means if such officials- who have also travelled from Nigeria- are included in the Nigerian list, Ghana will by far be outflanked by Nigeria.

The rest are members of parliament and party members.

Why I stayed away from APC convention- Borno Governor