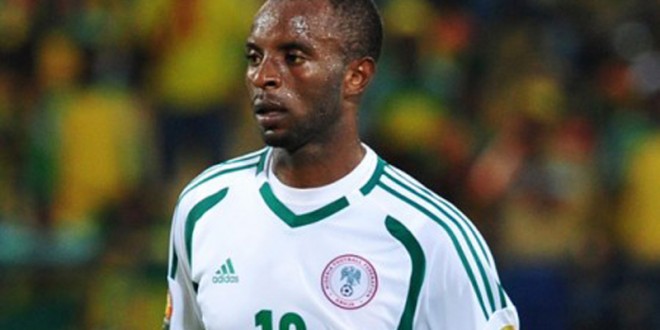 Mba played a key role in Nigeria winning the 2013 Africa Cup of Nations in South Africa.

The Super Eagles Head Coach, Stephen Keshi, has offered some explanations on why he dropped Sunday Mba from his final World Cup list on Monday.

The exclusion of Mba from the final 23-man Eagles squad to Brazil came as a big surprise to many Nigerians but the Big Boss explained that Mba was the architect of his own “misfortunes.”

According to Keshi, Mba, for inexplicable reasons, had suddenly not shown enough desire to be part of the 23-man squad going to Brazil.

“His lateness to camp contributed (to his missing out) but outside that he did not show the hunger, the fight, we expected from him,” Keshi explained to fifa.com. “We have only two and half weeks to prepare for the World Cup and he was not giving us what we wanted. He was very relaxed and it was unlike him.”

On his part Mba on Tuesday said he was gutted by his exclusion from the travelling party to Brazil.

Mba who played a key role in Nigeria winning the 2013 Africa Cup of Nations in South Africa was one of the shock exclusions from the final roster released late Monday night.

“Gutted to not make the 23-man team to the World Cup. Really wanted to fight and sweat for the glory of the team and my beloved country.” Mba said on his Twitter page, @mba_Sunday, on Tuesday morning.

Mba is believed to have knocked himself out of contention when he reported late to the Super Eagles camp in London ahead of the Scotland friendly.

The player claimed he encountered some problems with his travel documents which necessitated his return to France before finally connecting with the rest of his teammates in London.

Rather than solidify his place on Keshi’s list with another fine display against the Tartan Army, Mba was condemned to watching the high profile friendly with the Scots from the stands.

Interestingly, the duo of Michael Uchebo and Uche Nwofor, who many saw as outsiders in the 30-man list, ended up making the final cut after scoring a goal each to secure a 2-2 draw for the African champions.