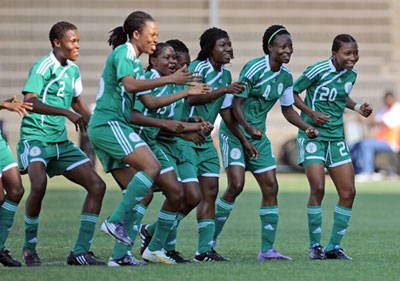 Nigeria’s national women team, the Super Falcons, are a step closer to qualifying for the 2014 Africa Women Championships billed for Namibia as they breezed to a 4-1 win over their Rwanda counterparts on Saturday.

The away victory effectively puts the Falcons on the right track in their journey to return to the zenith of Africa Women football having recorded their worst outing last term in Equatorial Guinea where they finished in a disappointing fourth place and are now looking at making amends in Namibia later this year.

Despite the Rwanda ladies promising an upset against the six time African champions, they were unable to withstand the fire power of the Nigerian ladies who simply blew their host apart with the 1-4 win recorded at the Stade Regional de Nyamirambo today.

With the victory, the Falcons are almost certain of qualification as they take the healthy advantage going into the second leg in Nigeria in a fortnight.

Book Review: Are We The Turning Point Generation? By Idiare Atimomo