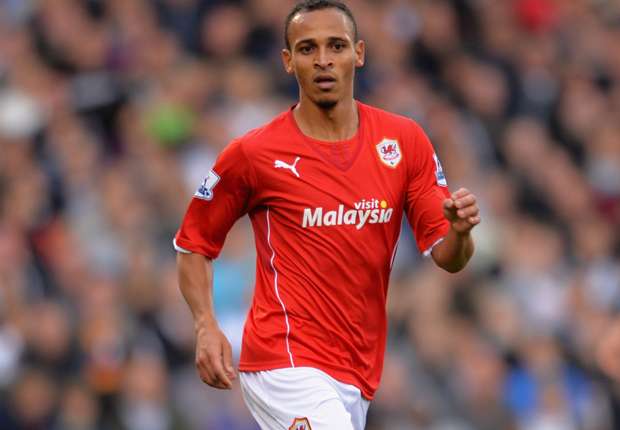 Sunday’s win is Stoke City’s second away win in the Premier League this season.

Nigerian striker, Osaze Odemwingie, was again on the scorer’s sheet as he scored the opening goal for Stoke City in their 1-4 away victory over Aston Villa.

The “out of favour” Super Eagles forward had hit a brace last weekend before adding yet another goal to his tally today.

Aside Odemwingie, Peter Crouch, Steven Nzonzi and Geoff Cameron were all also on target for the Potters as they came from behind to their host at Villa Park.

Sunday’s win is Stoke City’s second away win in the Premier League this season.

It was Aston Villa that took the lead with just five minutes on the clock as Christian Benteke fired in following a cross from Fabian Delph.

However, Stoke City began their comeback on 26 minutes when Nigeria’s Odemwingie ran onto Peter Crouch’s header before slotting past Brad Guzan.

Two minutes later Stoke City went into the front when Peter Crouch finished off from close range after Erik Pieters had muscled his way past Andreas Weimann.

The Potters growing in confidence bagged for themselves a third goal in the final minutes of the half as Steven Nzonzi was allowed to shoot low into the corner.

There was little action in the second half compared to the first 45 minutes but Odemwingie almost scored his second of the match when his effort was palmed away by Guzan.

Villa lost their discipline towards the end of the afternoon as Marc Albrighton, Leandro Bacuna and Nathan Baker were all booked by referee Mark Clattenburg.

The hosts’ misery was compounded in the final minute as Geoff Cameron put the icing on the cake with a calm finish that saw the game end 1-4.

It is yet to be seen if the rediscovered goal scoring form of Odemwingie will earn him a recall to the national team ahead of the Brazil World Cup.

Meanwhile, in the other Sunday game, Tottenham Hotspurs secured a 3-2 win over Southampton to keep hope alive for a possible top four finish at the end of the season.