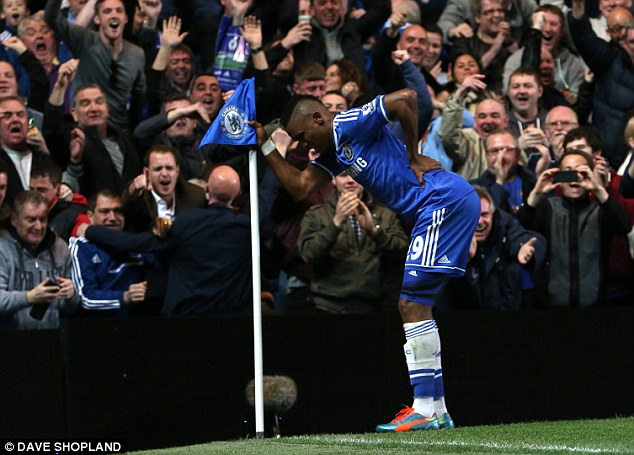 The Cameroonian mimicked an old man in his celebration.

Chelsea have moved seven points clear at the top of the Premier League courtesy of a 4-0 victory over London rivals, Tottenham Hotspur, at Stamford Bridge.

Two goals and a sending off in the space of four second-half minutes changed the complexion of the game, as the Blues extended their lead over the chasing pack in style.

The first goal of the game came on the 54-minute mark courtesy of Samuel Eto’o, with the striker slotting the ball past Hugo Lloris having latched onto an error by Jan Vertonghen in the Spurs’ defence to give Chelsea the lead.

Eto’o celebrated his goal with a mimick of an old man using a cane; probably to mock the rumour that he was older than his 34 years.

Four minutes later, Hazard doubled Chelsea’s advantage from the spot, with the referee awarding a penalty after Youness Kaboul was adjudged to have brought down Eto’o. The defender was shown a straight red card after the tackle.

As the game edged towards its close, Spurs made things worse for themselves with Demba Ba finding the back of the net twice following more errors at the back.

A Sandro slip allowed Ba to score his first, before Kyle Walker’s weak header back to his keeper was intercepted by the Chelsea striker to add his second and Chelsea’s fourth of the evening.

In other games, the Super Eagles duo of Joseph Yobo and Osaze Odemwingie shared the spoils as Norwich City and Stoke City settled for a 1-1 draw.

Cardiff City also gave themselves a boost of surviving relegation as they defeated bottom side, Fulham, 3-1.

However, Victor Anichebe and his West Brom teammates were not so lucky as they were handed a 3-0 bashing by Manchester United on their home ground.

The Baggies are now 17th on the log with relegation staring them on the face.