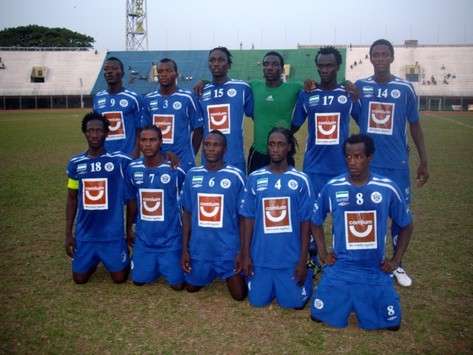 The return leg will be played next weekend in Warri.

Nigerian flag bearers, Warri Wolves, on Saturday evening in Douala began their CAF Confederations Cup campaign on a bright note as they defeated Union Sportive de Doula 2-3 in their 1st leg Round of 16 tie.

Musa Najare opened scoring for the Warri based team when he slotted home a pass from Stanley Dimgba in the 12th minute; but the Cameroonians drew level three minutes later through Ngoula Ngoula Patrick.

In the 30th minute, a penalty was awarded to the home team; but Okiemute Odah saved it as Douala Captain Moundi Djengue played it into his hands

Oghenekaro Etebo, who has just been invited to the Flying Eagles camp, increased the tally in the 35th minute when he fired a volley beyond goalkeeper Ande Derick Fru in goal for Union Douala.

The Douala boys fought back in the 80th minute when substitute Mengaptone Ivan headed a corner kick into the net.

Ibenegbu Ikechukwu, who joined from Heartland FC last month, nailed the Douala team with a 30-yard bullet which flew into the net in the 83rd minute. All efforts to equalise by the home team were rebuffed by Ike ThankGod led defence line.

The reverse fixture will take place in Warri next weekend.

Earlier on Friday, the other team representing Nigeria in the competition, Bayelsa United, also secured a commendable 0-0 draw away to FC Kondzo in Congo.

Man arrested for allegedly killing toddler by smashing him on floor