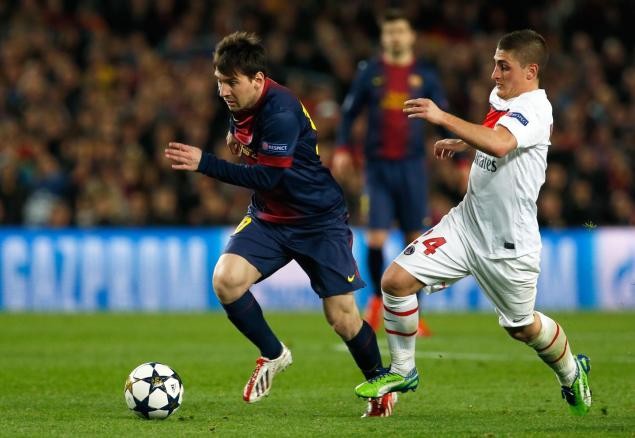 Barcelona and French side, Paris Saint Germian, are in good stead to qualify for the quarter final of the UEFA Champions League following their respective away victories in Tuesday night’s 1st leg Round of 16
ties.

While Barcelona churned out a hard-earned 0-2 victory over Manchester City in England, French Champions, PSG, were more ruthless, defeating their host Bayer Leverkusen of Germany, 0-4.

For the game in Germany, PSG got the best possible start they could dream of when Blaise Matuidi shot the visitors into the lead with just three minutes on the clock.

Barely two minutes after netting the opener, Matuidi got for himself a yellow card for a late clumsy challenge on a Leverkusen player.

The home team tried to get an instant response for the goal conceded but the PSG defence was up and doing; denying the host their target.
While it was PSG all the away at the BayArena, they had to wait till the 39th minute to double their lead, and this time it was from the penalty spot that Zlatan Ibrahimovic registered his first goal of the
night to make scores 2-0.

The Swede, who is gunning for the elusive UEFA Champions League crown, was again on the scorers’ sheet. This time it was a stunner from 20 yards that put PSG 3 goals ahead going into the break.
The second goal of the night saw Zlatan overtaking Cristiano Ronaldo to become the leading scorer in this year’s competition, with ten goals in just six games; before Yohan Cabaye added the icing on the
cake with the fourth goal on the night in the second half.

In England, goals for Barcelona came off the boots of Lionel Messi, who scored from the penalty spot, and Dani Alves in the dying minutes of the game at the Etihad Stadium.

Both PSG and Barcelona will hope to complete the job when they host the second leg at their respective home grounds in a fortnight.