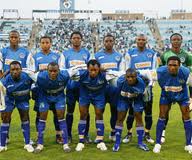 CAF Champions League: Enyimba pulls through despite defeat in Lome

Enyimba are the sole representatives of Nigeria in the championship

Nigeria’s sole surviving team in the CAF Champions League, Enyimba International, pulled through to the next stage of the competition despite suffering a 2-1 defeat in Lome on Sunday against their opponent, Anges de Notse.

The Aba Elephants having won the first leg 3-1 last weekend progressed into the next stage with a 4-3 aggregate score line.

Anges de Notse though regarded as dark horses in the flagship club competition gave Enyimba a scare as they shot into the lead at home the same way they did while in Aba last Sunday.

The Togolese team, which needed a 2-goal margin victory, saw their aspirations dashed after one of Enyimba’s new recruit AbdulRahman Bashir netted an equaliser in the second half.

And despite scoring another to make it 2-1, it was not enough to stop Enyimba from staying on to.

Interestingly, it was the same scenario that played out in the game involving Kano Pillars who after losing the first leg 3-1 could only muster a 2-1 win at the Sani Abacha Stadium in Kano against Congolese side AS Vita.

Enyimba are gunning for their third African title and despite the nervy starts, the Peoples Elephant remain confident that they can go all the way to fulfil their tall ambition.