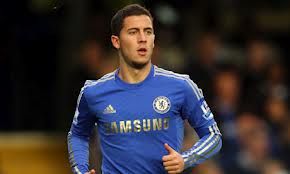 Manchester City were held by Norwich.

Chelsea are back at the summit of the English Premier League table courtesy of a 3-0 win over Newcastle United at Stamford Bridge on Saturday.

A hat-trick from Belgian forward, Eden Hazard, was all the Blues needed to knock-off Arsenal from the top spot and occupy the driver’s seat at the league title gets tougher.

Hazard got his first goal in the 27th minute when he fired a right-footed shot past Tim Krul after connecting to a low cross from Branislav Ivanovic from the right flank.

The Blues didn’t wait too long before they doubled their lead off a swift counter-attack initiated by David Luiz. It was Hazard again that got the ball in the back of the net in the 31st minute.

The Belgian completed his hat-trick from the penalty spot in the second half as Chelsea secured all three points that saw them overtake Manchester City who were held to a goalless draw, and Arsenal who lost 5-1 earlier in the day to Liverpool.

Jose Mourinho’s men now have 56 points from 26 games, one point above Arsenal who drop to second spot.

In other games, Crystal Palace defeated West Brom 3-1. Osaze Odemwingie was also on target as Stoke City forced their host Southampton to a 2-2 draw.

West Ham gave themselves some breathing space as they shocked Aston Villa 2-0 away from home; while Hull City secured the same result in their away game at the Stadium of Light against Sunderland.