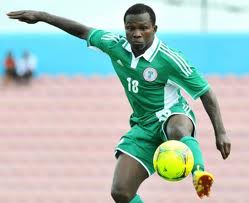 Irrespective of the outcome of the game, both teams will get $250,000 each.

The home based Super Eagles squad are through with their training ahead of Saturday’s third place clash against the warriors of Zimbabwe.

Friday’s training session held at the Greenpoint training pitch and lasted for a little over an hour with only the first fifteen minutes opened to the media.

From earlier observations, Gbolahan Salami still looks doubtful to play a role in the Zimbabwe clash having isolated himself from the early group exercises.

Nonetheless, the Eagles were in high spirits as they returned to their hotel ahead of their final assignment at the CHAN tournament on Saturday.

In a brief chat with journalists, Coach Stephen Keshi said his team have moved past their loss against Ghana and are now ready to go all out for the bronze in Saturday’s losers final.

“The Ghana game is already gone and we are not thinking of that anymore, we are have made sure we worked on the mistakes we made in our last match and by God’s grace and with the prayers of our fans, we should be able to do well against Zimbabwe,” the Eagles’ coach stated.

Some of the Eagles players who spoke with PREMIUM TIMES as regards the Zimbabwe clash said they are quite optimistic about their game against the Warriors.

One of the tournament’s revelations, Ejike Uzoenyi, said he believes he and his teammates can get the job done within the 90 minutes and save themselves the agony of playing extra time let alone penalty
kicks.

“I am look forward to a good game, I see us winning inside 90 minutes and convincingly too,” Ejike told PREMIUM TIMES.

Ugonna Uzochukwu, one of the players culpable of missing the penalty kicks in the semi-final game against Ghana said the Eagles will bounce back strong against the Warriors.

“We know this is our last chance to get something from this CHAN tournament so we are taking it seriously, by God’s grace we will win the game on Saturday,” the Enugu Rangers man stated.

Both Nigeria and Zimbabwe will battle for third place as they lost their semi-final match to Ghana and Libya respectively. Irrespective of the outcome of the game, both teams will get $250,000 (N37 million) each.