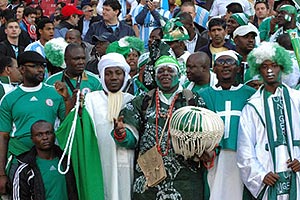 Supporters will leave on Saturday

No fewer than 200 members of the Nigeria Football Supporters Club will be in South Africa to cheer the Super Eagles at the 2014 Championship of Africa Nations, CHAN.

The competition will begin on January 11 and end on February 1.

The Eagles were drawn in Group A with host South Africa, Mali, and Mozambique in the preliminary round.

The club’s Secretary, Samuel Ikpea, said on Thursday in Lagos that the first batch of the members were expected to depart for South Africa on January 11.

“We are going to leave in batches; about 50 of us will depart the country early on Saturday to be able to meet the Eagles first match on the opening day,” Mr. Ikpea said.

He said the Eagles had on Wednesday arrived in Cape Town, South Africa, venue of their preliminaries in preparation for the championship. He applauded Globacom Telecommunications Company for sponsoring the club’s members to the competition.

Mr. Ikpea added that the club was also concluding preparation for the 2014 World Cup in Brazil, saying it would complete arrangements for visas after CHAN.