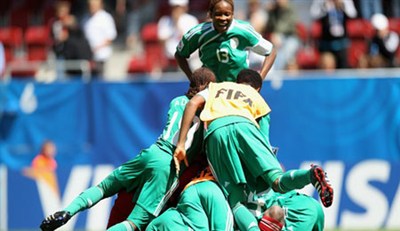 The Chairman, FCT Football Association, Musa Talle, on Monday boasted that no African country could stop the Falconets from qualifying for the 2014 FIFA U-20 Women World Cup.

The Nigerian ladies will meet South Africa in the first leg of the final round of African qualifiers on Saturday in Abuja.

The eight countries featuring in the qualifiers were divided into two groups with Nigeria, Sierra Leone, Tunisia, and South Africa in Group A.

The Falconets had defeated Sierra Leone 16-0 over two legs in the first round of the qualifiers’ and Tunisia 8-0 aggregate in the second round.

A country from each group will join 14 other continental champions at the seventh edition of the competition scheduled for Canada between August 5 and 24.

Talle said in Abuja that the final round qualifiers against South Africa would favour Nigeria home and away.

He noted that when the team started preparations, they were looking unprepared for the task. He said they were, however, able to prove themselves within the short period.

“When these girls started, people thought they were not ready but with the qualification so far, the girls gave good account of themselves. We appreciate the manner they were able to coordinate themselves within the little time they had and you could see that they were winning both their home and away matches. I cannot see for now, any country in the African continent that can defeat them. My prayer is that the way they started, they will continue to do the job well and represent Nigeria at the World Cup,” Talle said.

Pascal Patrick, the Special Assistant on Youth Matters to the President of the Nigeria Football Association, NFA, Aminu Maigari, urged the team to use home advantage to score more goals before the return leg.

He said South African female football was growing and the Falconets must not underrate their opponents.

Yusuf Fresh, an NFA board member, said that Nigeria would definitely overcome the South Africans to qualify.

He noted that the Falconets won their previous qualifying matches home and away, expressing optimism that the team would represent Nigeria in Canada.