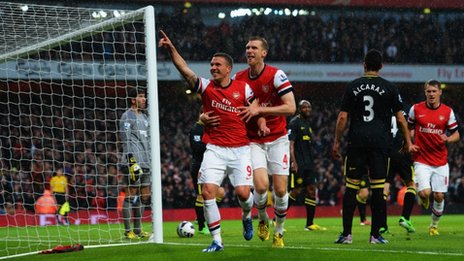 Liverpool were defeated 2-1 by Manchester City.

The London club, Arsenal, will stay in the number one spot on the English Premier League table after the conclusion of Week 18 matches having secured a 1-3 win over West Ham United at the Upton Park on Thursday; while previous table toppers, Liverpool, were defeated 2-1 away at the Etihad Stadium by Manchester City.

The Boxing Day win; the first for the Gunners in their last five outings, has taken their tally of points haul to 39 from 18 matches. They are now closely followed by City who have 38 points from the same number of games.

After a goalless first half in the Arsenal game, Nigerian born English striker Carlton Cole shot the Hammers to the lead at the in the first minute of the second half before Gunners responded with two goals from Theo Walcott and another from German striker, Lucas Podolski.

In other games, fellow title contenders, Chelsea, secured maximum points with a slim 1-0 win over Swansea City; while Osaze Odemwingie’s Cardiff City were pummelled 0-3 at home by Southampton.

In-form Everton fell by a lone goal at home against Sunderland, while Shola Ameobi’s Newcastle were unstoppable, securing the biggest win of the day; a 5-1 drubbing of visiting Stoke City.

Tottenham Hotspurs and West Brom settled for a 1-1 draw at the White Hart Lane.