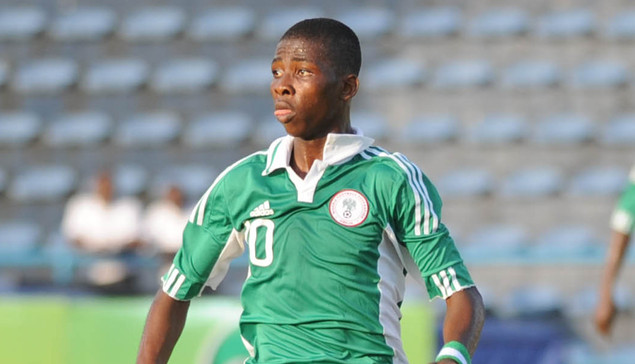 Iheanacho was the MVP at the FIFA U17 World Cup in the UAE.

All is set for Golden Eaglets forward, Kelechi Iheanacho, to join English Premier League giants, Manchester City, having been released on Monday from the Super Eagles camp in Abuja by Head Coach Stephen Keshi .

A statement from the Eagles Media officer, Ben Alaiya, confirmed Iheanacho’s departure from Abuja on the heels of the request made by his father.

Iheanacho was the Most Valuable Player at the recent FIFA U17 World Cup in the United Arab Emirates. The competition was won by Nigeria.

Keshi was quoted by Alaiya as saying that he had to sanction the departure of the player after his father, James Iheanacho, personally put a call to him on Monday afternoon requesting the release of his son for the trip to England.

“Initially a young man came declaring that he was the agent of Iheanacho, but I declined to deal with him until I hear from the family because the boy is still a minor,” Keshi said. “It was soon after my rejection that I got a call from his father who told me that they have gotten travelling visa to the United Kingdom and that I should oblige him with his son’s release. I did and told the young man to go and do the nation proud at whichever club he finally chooses to settle down with”.

Keshi acknowledged that Iheanacho is a talented player but also cautioned that the player should be handled gently and professionally as he navigates his professional career.

“We have to be cautious not to push the players too hard so that nobody will break down”, Keshi said.