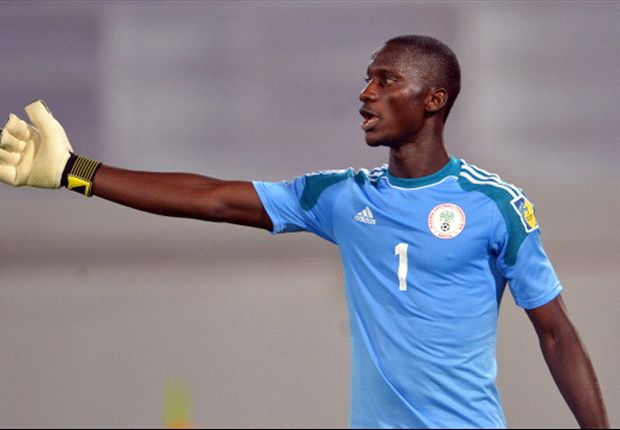 Dele Alampasu was the best goalkeeper at the U-17 World Cup.

Two top European clubs have made offers to the goalkeeper of the world conquering Golden Eaglets, Dele Alampasu.

The goalkeeper told PREMIUM TIMES in Abuja that he would move to an European club in January after he received concrete offers from Juventus of Italy and Club Genk of Belgium.

“I maybe going to Genk, they are showing interest in me but I also have another offer from Juventus FC, a club in the Italian league.

“By God’s grace I will be in a new club in January” he said.

When asked if he would have preferred offers from English Premier League clubs like some of his Golden Eaglets teammates, Alampasu said no.

“English premiership is no good for me to start; I think I should start from Belgium, Italy or Germany, that will be okay for now.”

The former Abuja football academy shot-stopper expressed joy at being invited to the camp of the Nigerian-based Super Eagles in preparation for the African football championship, CHAN.

“I am so happy to be here in the Super Eagles, I know it is not easy to be with the senior boys in the senior team, they took us as their junior brother and everybody is like one family here,” the footballer said at the Abuja camp of the eagles.

“It is like a motivation for me to train and play with the likes of Sunday Mba and Chigozie Agbim. It has not been easy from U17 to national team, it gives me more courage and I can push myself further,” he added.

Alampasu, who won the golden gloves as the best goalkeeper at the recently concluded FIFA U17 World Cup, said he would love to further his education and get a business-related higher education degree.

“School is very sure; I want to go to school to study a course in business. After signing for a football club, I will still enroll in school.

“They should pray hard and they should also bring their heads down, don’t lose focus. One day you’ll be there,” he said.