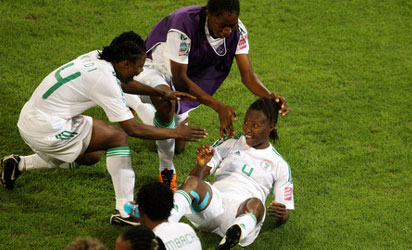 Nigeria’s women national team, Super Falcons, were on Sunday defeated 2-0 by their Japanese counterparts in an international friendly at the Fukuda Denshi Arena in Japan.

A goal in each half saw the world champions enjoy a sweet revenge over the Nigerian side who were 1-0 winners in the last meeting between both sides.

Sunday’s outing was the first for Falcons caretaker coach Edwin Okon who was contacted by the Nigeria Football Federation to help steer the affairs of the team pending when a substantive coach will be contracted.

The Flacons held their host till the dying minutes of the first half before Yuki Ogimi scored the first goal in the 42nd minute for Japan.

And while the Nigerian team hustled for an equaliser it was the host that got another goal through Isihaya who made it 2-0 in the 67th minute.

Japan coach Sasaki Norio called up a total of 41 players for the encounter and he hopes it would be an opportunity to assess the players he would be using when Japan gets its campaign underway at the Asian Cup.

Both sides will meet again on Thursday at the Fukuda Denshi Arena in Japan.